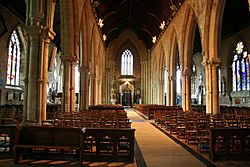 St Wulfram's Church, Grantham, is a parish church in the Church of England in Grantham in Lincolnshire. The church has been a Grade I listed building, since 8 May 1950.

In his book England's Thousand Best Churches, Simon Jenkins begins his description of St Wulfram's: "Here is the finest steeple in England", and in 2020 an online contest run by poet Jay Hulme named it as the finest non-cathedral English church.

It is believed that a church stood on the site long before Norman times, but of the original Saxon church probably only a few stones, near the organ loft, remain. The church was totally altered by the Normans and the remains of their church may still be seen in the nave. From its foundation until the 18th century, it was the only church in the town, helping to explain its size in comparison with the churches at nearby Stamford. Although there were a number of religious cells in Grantham, including a Franciscan Friary, the Grey Friars, west of the market place, the wealth of the medieval wool trade was channelled into St Wulfram's Church.

The north aisle arcades, except for the two west bays, date from before 1180. The original Norman church was ruined by fire when it was hit by lightning in 1222. The north aisle was rebuilt in about 1250. In 1280 the church expanded westwards over what was the market-place. The huge piers in the west end of the church have many 13th-century mason's marks, as do the spiral stairs to the belfry. In 1450 the north aisle was extended, and some time after 1496 St Katherine's Chapel was added by the Hall family. In 1550 the south aisle was lengthened and the Lady Chapel was built.

The church was restored in 1866–67 by Sir George Gilbert Scott. Of interest are window frames from different periods, the use of ballflower ornament and the crypt chapel. The north porch was built to house relics of St Wulfram (possibly an arm bone), and the chained library occupies a room over the south porch which was once a priests' living room.

In November 2015 Fr Stuart Cradduck installed an artificial ice rink and more than 100 decorated Christmas trees in the nave of the church. He said, "No-one expects an ice rink inside a church... So let's do something unexpected. Be something different and challenge people's conceptions about who we are and what we are doing. We're not at Christmas of course, it doesn't start until 25 December, but life is so full and bonkers for people so let's start it now or at least give people a glimpse of the joy of Christmas."

The design of the church, which is built from local limestone, was probably influenced by Salisbury Cathedral. The church's chief feature is the slender crocketed spire which stands 282.5 feet (86.1 m) high. The spire is the sixth highest in the country (Salisbury and Norwich Cathedrals' are higher), and fourth highest of any parish church, after the Church of St Walburge, Preston, St James' Church, Louth, and St Mary Redcliffe, Bristol. It is the third highest of any Anglican parish church in the UK, after St James' Louth and St Mary Redcliffe, and second highest in Lincolnshire, after St James' Louth.

The tower now rises free of the roofline of the aisles, with two tiers of blind arcading. Then come two stages of bell openings, one with two windows the next with just one, as if to increase the tension. The tower is carefully tapered, with lines accentuated by angle buttresses. Four pinnacles now effortlessly conceal the shift from square tower into octagonal spire, which rises from its small broaches in a single final thrust. The taper of the spire seems perfectly judged, with its ribs and three tiers of diminishing lucarnes covered in ballflower, as if infested with golden snails. Grantham's tower ranks with any masterpiece of English art. Such was the effect on Ruskin that he (allegedly) swooned on first seeing it. 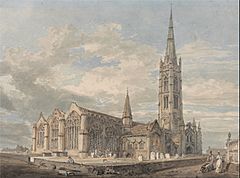 The tower is not symmetrical as one corner buttress accommodates a narrow 211 step spiral staircase which rises to the bell-ringing chamber and the parapet beyond. While later churches had two, St Wulfram's has only one. The parapet around the tower is waist high and is 143 feet (43.6 m) above the ground. Once a year, during the annual heritage week at the start of September, areas normally kept closed, including the parapet, are open to the public.

The tower's west front has 12 medieval niches or tabernacles containing modern statues. The bottom four statues, the gift of L. F. Catlin unveiled in 1921, are of St Michael, St Wulfram, the Blessed Virgin Mary and St John the Baptist. The upper eight statues, installed in 1956 are of St Luke, St Matthew, St Mark, St John the Evangelist, and below them St Paul, St Aidan, St Augustine and Dr John Hine a former bishop of Grantham with a cat playing with his robe tassel.

In 2013 an appeal was launched to save the spire. 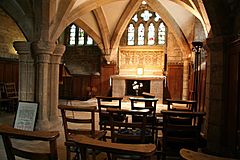 The altar in St Wulfram's crypt

The crypt chapel was probably dedicated to the Holy Trinity and was originally entered from outside. A staircase was built in the 15th century allowing access from the church interior. The crypt door and chests are the only remaining examples of medieval woodwork in the church.

The crypt has been used as a depository for the relic of St Wulfram, as a charnel house when the graveyard became full, and a store-room for church valuables and corporation records. In 1808 the church silver was stolen from the crypt and never recovered. So many pilgrims have visited the crypt that the stone steps have worn down and been inverted. The stone in front of the altar has also been worn away by the knees of pilgrims.

The church has the first library in England to be endowed under a civic authority, the Borough of Grantham, not in the possession of a cathedral, church, college or school. It may thus be regarded as the country's first "public library", even though kept in a church. In 1598 Francis Trigge, the rector of Welbourn, gave £100 for a small library of books for the clergy and literate laity of Grantham, with the borough providing the furnishings for the library. The books, numbering more than 350 titles, were most probably obtained from Cambridge. Both Catholic and Protestant works were included in the collection, making it unique for the time, with representation of the conflicting religious ideals of the Reformation. To prevent theft, the books were kept chained. Today, the Francis Trigge Chained Library contains 356 separate items recently examined, repaired and catalogued, with more than 80 volumes still secured by chains. The earliest book, printed in Naples in 1476, is found in no other library. The library is housed above the south porch, where a squint window allows viewers in the library to see all parts of the church, but to remain almost invisible from the body of the church. 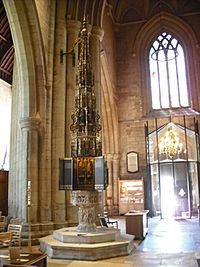 The font, with cover by Sir Walter Tapper

The reredos, designed by Arthur Blomfield, who submitted drawings in 1881, was constructed in 1883/84 by Heaton, Butler and Bayne of London and dedicated to Canon G. Body; it was painted by Charles Floyce, a later partner of Charles Edgar Buckeridge. The cost of reredos and east window, some £1,800, was paid for by subscription. In 1901/02 four of its 19 panels were raised and seven new panels added. It was mounted in a wide elaborately-carved frame and moved forward from the east window onto a green and white marble plinth. 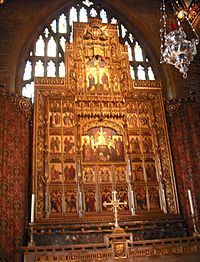 A brass cross on the super-altar was designed by Arthur Blomfield in 1886. The medieval font from about 1496 has an ornate cover shaped like a church spire designed by Sir Walter Tapper in 1899 to celebrate the Diamond Jubilee of Queen Victoria. The cover's interior is decorated with carvings of Edward the Confessor, St Hugh and St Wulfram. Before the cover was added, the font stood on a low stone plinth but is now raised. Each of the font's eight faces, its shaft and base is covered with carvings which are worn and damaged, but appear to show the Annunciation, the Nativity, the Circumcision of Jesus, the Baptism of Jesus, Christ blessing the little children, the Transfiguration, the sacrifice of Isaac and the Three Wise Men. Emblems and devices on the underside of the font include a pelican and a Tudor rose which may suggest the font's donor was Richard Foxe, from Ropsley, who re-founded the King's School, Grantham. Four emblems – an angel, a lion, an ox and an eagle may denote the Four Evangelists. The font shaft has seven figures and an empty eighth space. St Andrew and his cross are identifiable. The font base has roses, quatrefoils and masks.

Along the south wall are the remains of two 14th-century tombs of wealthy local merchants. Near the east end is the Harrington tomb and nearer the parish clerk's office is the tomb of Richard Saltby. The faces of angels above both tombs have mostly been cut in half, mutilation believed to have occurred during The Reformation or the English Civil War. 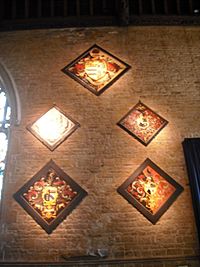 Five hatchments on the south wall

The royal arms are those of Queen Elizabeth I, with the motto VIVAT REGINA over the arms of the Grantham Borough used between 1405 and 1603 and the Stuart Arms, installed at the Restoration and used until 1701, over the borough arms incorporating an oak leaf as a reference to King Charles II.

A set of chimes which had been disused for years, and also some quarter jacks were re-instated during 1877. The new clock and chimes by Gillett and Bland were started on 16 February 1877. On 5 November 1877 the new clock was inspected by Sir Edmund Beckett who assessed that it was one of the best turned out by Gillett and Bland.

There are 13 bells in the tower (14 counting the "Ting Tang") used for English change ringing and for the clock chimes. Since two trebles were added in 2003, there are two separate rings. The original ring of ten bells was cast in 1946, with a tenor 32 cwt 1 qtr 11 lbs (in note C#), and a light ring of eight bells with a tenor of 10 cwt 1 qtr 11 lbs (in note G#). The oldest bell is the Sanctus bell or Ting Tang, given by Ann, widow of the Reverend Hurst, chaplain to King Charles l in 1674. In 1946 the bells were removed during the rebuilding of the spire and re-cast by Taylor of Loughborough. Two bells, both trebles, cast by Taylor, were added in 2003. A further 2nd bell was added in 2012 to make a diatonic 12, this making the ring of 12 musically correct.

An organ from 1640, the gift of Dr Farmery was destroyed in 1643 during the English Civil War. The present organ by John Harris and John Byfield dates from 1735. It was rebuilt by George Pike England in 1809 and 1833, by Forster and Andrews between 1845 and 1868, by Norman and Beard in 1906 (producing the organ that may be heard today), by Rushworth and Dreaper in 1952, by Cousans of Lincoln in 1972, and by Phillip Wood and Sons of Huddersfield in 1993–94 when a fourth manual was added. The case designed by Sir Walter Tapper RA took eight years to complete. The old organ case now encloses the choir vestry in the north west corner of the church. The specification for the organ, regarded as one of the finest in Lincolnshire, can be found at the National Pipe Organ Register

All content from Kiddle encyclopedia articles (including the article images and facts) can be freely used under Attribution-ShareAlike license, unless stated otherwise. Cite this article:
St Wulfram's Church, Grantham Facts for Kids. Kiddle Encyclopedia.