St Walburge's Church is a Roman Catholic church in Preston, Lancashire, England, northwest of the city centre on Weston Street. The church was built in the mid 19th century by the Gothic revival architect Joseph Hansom, designer of the hansom cab and is famous as having the tallest spire of any parish church in England. St Walburge's is recorded in the National Heritage List for England as a designated Grade I listed building.

In April 2014, Michael Campbell, Roman Catholic Bishop of Lancaster, announced that the church would be entrusted to the Institute of Christ the King Sovereign Priest in autumn 2014, as a shrine for Eucharistic Devotion.

St Walburge's is dedicated to Saint Walpurga, an English saint, born 710 AD., daughter of St. Richard, a Saxon king. With her two brothers St. Willibald and St. Winebald, she went to Germany as a missionary. She was renowned for her miraculous healing of illnesses. The church is part of the Catholic revival that transpired during the time of England's Catholic emancipation.

In 1847, at a time of great Roman Catholic revival in England, and prosperity brought by the textile mills of Lancashire, the architect, Joseph Hansom, was commissioned to build a large church. Work began on the construction of the church in May 1850, and it was ready for an opening ceremony on 3 August 1854. The church was further extended, with its polygonal sanctuary with central window 35 feet (11 m) high being added in 1873.

St Walburge's, with several other churches in Preston, was threatened with closure by the Catholic Diocese of Lancaster in 2007. This aroused much interest because of the quality of its architecture, its significance to the parish and its landmark status in Preston. The closure was given a stay of seven years from August 2008 and local fund-raising drives sought to supplement grants towards the restoration of this important building. David Garrard, the Historic Churches Adviser of the Victorian Society said:

An outstanding building by an ingenious and imaginative architect, St Walburge’s is one of Preston’s greatest historic buildings. It was built to express the pride and confidence of the Roman Catholic community after legal restrictions on religious observance were lifted in the 19th century. To close it now would cost local people access to some of Lancashire’s richest heritage.

On 4 April 2014, Michael Campbell, Roman Catholic Bishop of Lancaster, announced in a pastoral letter that

...Gilles Wach, General Prior of the Institute of Christ the King Sovereign Priest, and I – together with Father Simon Hawksworth - have agreed, to establish a foundation of the Institute at the Church of St Walburge, Preston - hopefully in the autumn. The arrival and presence of the institute in the church and presbytery at St Walburge’s will enable the sustainability and care of this magnificent church so that it can be open each day as a shrine or centre for Eucharistic devotion and adoration. St Walburge’s will remain part of the Parish of St Walburge and the Sacred Heart but will specifically provide for the celebration of Holy Mass and the other Sacraments in the Extraordinary Form of the Roman Rite. It is envisaged, however, that the current Ordinary Form Mass, will continue to be celebrated here on Sunday for as long as there is a pastoral need...

Campbell's 2014 decision is similar to the 2011 decision by Mark Davies, Bishop of Shrewsbury, to entrust the then-closed landmark Church of St Peter, Paul and Philomena's, New Brighton to the Institute of Christ the King for the same purposes.

The Shrine Church was officially opened on 27 September 2014, with a High Mass celebrated by Gilles Wach, Prior General of the Institute of Christ the King, in the presence of Bishop Campbell. The Mass is celebrated daily at the Shrine and the Sacraments are offered in the Traditional Roman Rite according to the charter of the Institute of Christ the King. There is also an Ordinary Form of Mass on Saturday evening celebrated by the local parish administrator for the members of the former parish.

Vertical panorama of St Walburge's spire, viewed from the west

Externally, St Walburge's spire, rising to 309 feet (94 m) is the dominant landmark in Preston and is one of the tallest structures of any sort in Lancashire. After Salisbury and Norwich Cathedrals, it is the third tallest spire in the United Kingdom, and is the tallest on a parish church. The steeple is constructed from limestone sleepers which originally carried the nearby Preston and Longridge Railway, giving the spire a red tint during sunset. The spire was the last to be worked upon by steeplejack and TV personality Fred Dibnah. Dibnah installed his red ladders to inspect the steeple, but television filming commitments then meant he was unable to complete the job. The ladders were left at the church for several years and were donated to the tradesman who eventually took the job.

The tower contains a single bell of 31 cwt (1.5 tonnes) cast by Mears and Stainbank of Whitechapel which is the heaviest swinging bell in Lancashire. The use of the bell is restricted, due to protected birds nesting in the belfry, meaning it can only be rung in winter months. 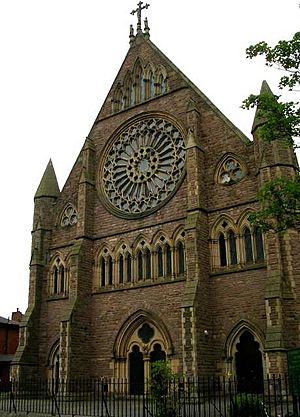 St Walburge's is renowned not just for its height but also for the inventive quality of its architecture, in which the architect has looked to Gothic models, employing the traditional features in a creative and harmonious way. The Open Churches Trust says of St Walburge's that it "undoubtedly an architectural gem of the North West of England."

The interior, which seats about 1,000 persons, is 165 feet (50 m) long and 55 feet (17 m) wide. The open wooden roof of 83 feet (25 m) is supported of fourteen hammerbeams, on the ends of which stand lifesized carved the figures of saints. The church contains an organ by William Hill of London, 1855. Other significant features include a wooden triptych and a crucifix with the shield of Preston and the motto "Princeps Pacis". St. Ignatius of Loyola is also prominently represented to the right in the sanctuary, echoing the influence of the Jesuit priests still active in the city. The patron saints of Great Britain are also represented.

All content from Kiddle encyclopedia articles (including the article images and facts) can be freely used under Attribution-ShareAlike license, unless stated otherwise. Cite this article:
Church of St Walburge, Preston Facts for Kids. Kiddle Encyclopedia.