Consisting of 5 square miles (13 km2) of farmland, lakes, woodland, beaches, and cliffs, the estate is always accessible to visitors. It is owned and maintained by the National Trust. 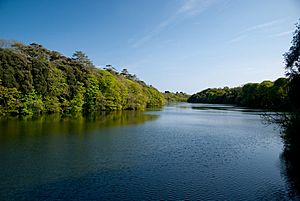 One of the lily ponds

Stackpole Court, a mansion, was built just outside the village of Stackpole. During the English Civil War, the Lort family, who owned the estate from 1611 to 1698, took the side of the King, and the house was besieged by Parliamentarians, to whom they eventually surrendered. When Sir Gilbert Lort died in 1698 the estate passed to his sister Elizabeth who had married Sir Alexander Campbell, Thane of Cawdor, in 1689. She outlived her husband, and on her death in 1714 the estate passed to her son John Campbell.

A new mansion constructed of limestone was built in later years with extensive gardens, greenhouses and fine collections of plants. Much of the Stackpole Estate farmland was requisitioned at the start of World War II to create a training ground for British troops. Castlemartin Training Area range still occupies this land. This made the estate unviable and The Cawdors returned to their Scottish estate in Nairnshire in the early 1940s. Crippling taxes on the empty mansion meant it was demolished in 1963, leaving behind the estate's outbuildings, parkland and beaches which are looked after by the National Trust and enjoyed by the public today. The 100 acres (0.40 km2) of lakes, which are today known as the Lily Ponds, were created by the damming of the three narrow limestone valleys in 1780 and 1860 by the Cawdor family. 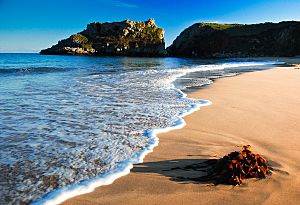 The Stackpole Estate contains the beaches of Barafundle Bay and Broad Haven South. The 100 acres (0.40 km2) of lakes are home to Eurasian otter, goosander, gadwall and kingfisher. From the cliff tops and beaches, bottlenose dolphin and basking shark can sometimes be seen along with species of seabird such as kittiwakes and red-billed choughs. The Stackpole estate is contains one of the largest colonies in Britain of the greater horseshoe bat. 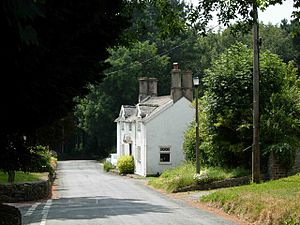 Part of the village

The village is approximately 4 miles (6.4 km) south of Pembroke in the community of Stackpole and Castlemartin and has a population of around 200. It has its own voluntary controlled primary school for children aged 4 to 11. The school was constructed in the late nineteenth century.

Stackpole village was moved from its original medieval site in 1735 to accommodate the growing Stackpole Estate. However, present day Stackpole is considerably larger than it was then. Stackpole has a public house, The Stackpole Inn, which occupies the former village Post Office, a building of sixteenth-century origin. The village is surrounded on all sides by woodland and arable farmland.

During the 1950s and 1960s, the village expanded with modern homes built at the edge of Deer Park and around the school.

Just outside the village there is the Stackpole Outdoor Learning Centre which is a multi-purpose venue run by the National Trust with a theatre, licensed bar and conference facilities. It is immediately adjacent to the Lily Ponds and the Eight-Arch Bridge and occupies a remarkably tranquil part of the estate near Home Farm and less than a 1-mile (1.6 km) walk from Broad Haven South beach. 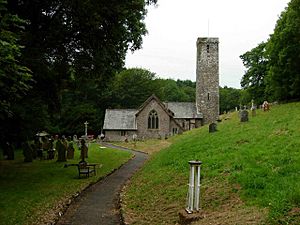 Stackpole Elidor church is dedicated to St. James and St Elidyr, and goes back to the thirteenth century. It lies at the bottom of a quiet wooded valley with just three small cottages and the rectory in the immediate vicinity. The layout of the church is in the traditional cruciform shape, aligned east to west, with a chancel and nave flanked by two transepts. The tall, slender tower is undoubtedly the oldest part of the present structure, dating back probably to the thirteenth or late twelfth century. It is of the typical South Pembrokeshire form (see Little England Beyond Wales).

It appears that by 1851 the state of the fabric of the church made a complete restoration essential, although the building had been carefully maintained until only a few years before. Richard Fenton, in his Historical Tour through Pembrokeshire published in 1810, quotes from a letter written by Stephen Davies, Canon of St. Davids Cathedral, to the antiquary Browne Willis:

In 1851 John Frederick Campbell, 1st Earl Cawdor, engaged Sir George Gilbert Scott, the most respected English church architect of the day, to direct the work of restoration. He employed a Cardiff builder, WP James, and the work cost a total of "£1,804 7s 2½d" which adjusted for 2010 would be £105,609.09.

The result is the typical sound, workmanlike building that Scott produced in his renovations, with a tall, narrow chancel arch, colourful Minton tiles on the chancel floor and sanctuary walls, and the Middle English or Decorated style of tracery in the main windows. The transepts retain their fourteenth century vaulting, and the Lort chapel its rib vaulting. There were originally matching hagioscopes on each side of the chancel arch, though the north squint was later blocked by the organ installed in 1874. In the south transept there is a small piscina, probably of the fourteenth century, indicating that there may have been a side altar.

All content from Kiddle encyclopedia articles (including the article images and facts) can be freely used under Attribution-ShareAlike license, unless stated otherwise. Cite this article:
Stackpole Estate Facts for Kids. Kiddle Encyclopedia.