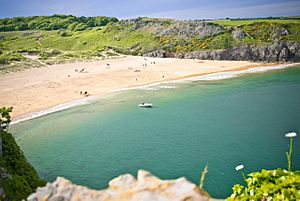 Barafundle Bay is a remote, slightly curved, east-facing sandy beach in Pembrokeshire, Wales, near Stackpole Quay. It is part of the Stackpole Estate, managed by The National Trust. The beach, which was their private beach, was owned by the Cawdor family of Stackpole Court. On the northern approach to the beach are steps and a wall which were built by the owners to ease access to the beach.

Barafundle Bay is set between cliffs to the north and south; it marks the end of the Carboniferous Limestone cliffs of the Castlemartin peninsula to the south-west, and the beginning of the Old Red Sandstone of Devonian age at Stackpole Quay to the north-east.

In 2004, Barafundle Bay was included in a list of the Top 12 beaches in the world. The Good Holiday Guide also said that it was the 'best beach in Britain'. In 2006, it was voted the best place in the United Kingdom for a picnic by Country Life magazine. In the 2019 Wales Coast Awards, it was awarded both the Seaside and Green Coast awards.

All content from Kiddle encyclopedia articles (including the article images and facts) can be freely used under Attribution-ShareAlike license, unless stated otherwise. Cite this article:
Barafundle Bay Facts for Kids. Kiddle Encyclopedia.