Stamford Town Center is an urban shopping mall located in Downtown Stamford, Connecticut. The 761,000 sq. ft mall is the eighth largest in Connecticut, with space for about 130 stores and restaurants. It includes a 250,000 sq. ft Macy's and a 78,000 sq. ft Saks Fifth Avenue OFF 5TH as anchors. The 1991 film, Scenes from a Mall, was partially filmed at this center.

Built by F.D. Rich Co, and opened in 1982, the mall's site was part of the Landmark urban renewal project and had been the location of tenement structures that once lined Greyrock Place, the street which is its primary address. Saks Fifth Avenue opened its store in the mall on March 12, 1983. A third anchor, a 160,000-square-foot (15,000 m2) Filene's closed in 2005 (before the merger of the May Department Stores and Federated Department Stores), as the store's sales were not up to par. This location originally opened as a JCPenney store, but was eventually shuttered and replaced by Filene's in 1996. The far south end of the mall which housed JCPenney and Filene's was demolished in 2006 and was replaced by a pedestrian-oriented exterior complex of retail stores and restaurants that directly connects to the mall. It opened on November 1, 2007 with a two-story Barnes & Noble Booksellers.

The construction of the mall and adjacent office towers had a profound effect on the face of downtown Stamford during the 1970s and 1980s, and was profiled in a May 8, 1988 article in The New York Times headlined "A Town Sells Off Pieces of its Soul."

Stamford Town Center has four floors of shopping – floors 3, 4, 5 and 7 – with The Food Court located on the 7th floor. The supporting parking structure has space for 4,000 cars and is situated in levels below and above the mall, thus forming a kind of mall and parking 'sandwich'.

The mall was a significant part of Stamford's urban renewal efforts, and thus was not without controversy. The mall gutted the heart of Stamford's traditional Main Street retailing and business district, and is widely perceived to be a large fortress-like structure, that even today appears hugely out of scale to the remaining cityscape. Another perception of its design is that it was built to primarily cater to auto-oriented visitors and it was made difficult to enter from the street as a pedestrian. Most pedestrian routes from the street involve going through the mall's anchor stores or through the other (primarily office) buildings of Landmark Square and Atlantic Street. The redevelopment of the former Filene's/JCPenney location has alleviated some of these original design characteristics.

From its opening, the mall was very popular and drew shoppers and tourists from as far as the New York City boroughs and even internationally. The redevelopment of the former Filene's anchor has added pedestrian-friendly retail space and provides a better streetscape. In November 2007, Stamford Town Center opened four new restaurants; California Pizza Kitchen, Così, Kona Grill, and P.F. Chang's China Bistro. The Capital Grille opened on February 25, 2008. Barnes & Noble Booksellers opened their largest Connecticut store in this new space. In 2016, P.F. Chang's shut down and was replaced by The Cheesecake Factory in early 2017.

The Plaza is a pedestrian-friendly complex of restaurants and merchants that are new to Connecticut and the region.

The Plaza offers valet parking and easy access to parking level 1 from Tresser Boulevard. There is also a new entrance that was built to ease accessibility to the main mall. Other mall and parking levels are accessible by two all-glass elevators that access Levels 1, S*/M* for the Plaza, and the mall levels (4–5), and levels 6–Rooftop (10). Barnes & Noble is accessible from Level 4 and from the Plaza. H&M is accessible from only Level 5 of the mall.

The initial opening of the Plaza (which included Barnes & Noble, H&M, California Pizza Kitchen, Così, Kona Grill, and P.F. Chang's) occurred on November 1, 2007. Mitchell's Fish Market opened on December 8, 2007, closed in 2014, while the Capital Grille opened on February 25, 2008. Famous Dave's Bar-B-Que had planned to open in this new space, but pulled out of the project. P.F. Chang's China Bistro closed in April 2016, while The Cheesecake Factory opened in October 2016 after renovating P.F. Chang's former space. The Così location closed in October 2016 as part of the company's Chapter 11 reorganization. 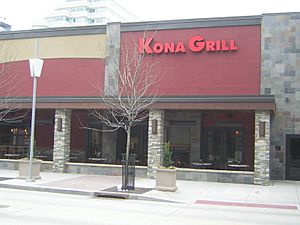 Kona Grill in The Plaza

The current restaurants located in the Plaza are:

The retail stores in the Plaza include:

All content from Kiddle encyclopedia articles (including the article images and facts) can be freely used under Attribution-ShareAlike license, unless stated otherwise. Cite this article:
Stamford Town Center Facts for Kids. Kiddle Encyclopedia.