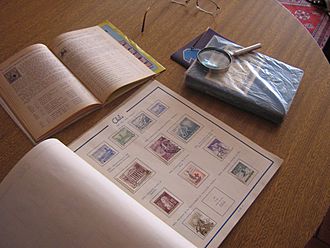 There are many stamp collecting clubs around the world. Belonging to a stamp club or philatelic society has many advantages. For example, Royal Philatelic Society of Canada members receive magazines, can get help with questions through phone support, and purchase insurance for their collections at a discounted group rate.

All content from Kiddle encyclopedia articles (including the article images and facts) can be freely used under Attribution-ShareAlike license, unless stated otherwise. Cite this article:
Stamp collector Facts for Kids. Kiddle Encyclopedia.