Columbus is a historic statue in Providence, Rhode Island, United States which formerly stood on Elmwood Avenue in Columbus Square. Columbus is a bronze cast of a sterling silver statue which was created by Rhode Island's Gorham Manufacturing Company for the 1892 Columbian Exposition in Chicago. The original silver statue was not meant for permanent exhibition, but rather as a demonstration of the skills of the Gorham Company, and was later melted down. The bronze cast was dedicated November 8, 1893 as a gift from the Elmwood Association to the City of Providence. The statue was created in 1893 by Frédéric Auguste Bartholdi and added to the National Register of Historic Places in 2001. It was removed from Columbus Square in 2020 by the City of Providence.

Cast in 1893, the statue of Columbus that once stood on Elmwood Avenue was produced by the Gorham Manufacturing Company who commissioned master sculptor, Auguste Bartholdi. The bronze statue is a cast of the original made of sterling silver, which was commissioned for the 1892 Columbian Exposition in Chicago, Illinois. For the upcoming exposition, Gorham wanted a demonstration piece to show the skill of its foundry and commissioned Bartholdi to create a statue of Columbus. The completed model was shipped across the Atlantic Ocean to be cast from 30,000 ounces of silver at Providence, Rhode Island. The casting was a ceremonial affair, where guests "were feted as they watched the process". Gorham officials accompanied and shipped the statue to Chicago via rail. It served as a demonstration piece at the exposition, showcasing the skill of its foundry in the technically difficult task of casting a work in sterling silver. After the exposition, the statue was returned to Providence where it was melted down: a silver statue was impractical as a permanent outdoor sculpture and the piece had already served its celebratory and advertisement purpose.

In 1893, a bronze replica of Columbus was cast by the Gorham company and gifted to the City of Providence by the Elmwood Association, a civic group from a neighborhood near Gorham. It is known that Bartholdi visited Newport, Rhode Island in 1893, but it is unknown if he was involved in the production of the bronze cast. The statue was dedicated on November 8, 1893 at 2:30 p.m. Professor Alonzo Williams was the presenter of the statue to the city and Mayor Potter acted as "response on behalf the city". Music was provided by the Reeves American Band and the song "Columbus" was performed. The oration was given by Reverend H. W. Rugg and a chorus of children lead the crowd in singing "My Country, 'Tis of Thee". The site of the statue was originally deeded to the Town of Cranston by Joseph Cooke on May 24, 1824. The Town of Cranston deeded it to Providence in 1868 and renamed it Columbus Park in 1893.

The statue was sometimes a focal point for Columbus Day ceremonies and speeches. One such event in 1939 was attended by the mayor, alderman, and council members. 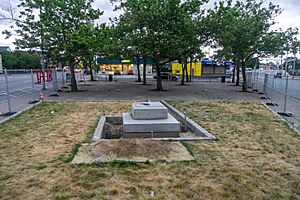 In June 2020, on the order of mayor Jorge Elorza, the Columbus statue was removed from Columbus Square. The order was given as a response to statue removals across the United States in the wake of George Floyd protests. During the removal, dozens of people from the neighborhood gathered to cheer. The city has not disclosed where the statue would be stored, nor what would be its fate.

The bronze cast depicts a 6.6 feet (2.0 m) high by 4.5 feet (1.4 m) wide and deep, "larger-than-life size" standing figure of Christopher Columbus atop a 5.25 feet (1.60 m) by 5.33 feet (1.62 m) plain square base of grey Westerly, Rhode Island granite. The National Historic Register of Places nomination describes the statue: "The explorer is caught in mid-stride, his left foot stepping off the base. In his left hand he holds a globe; his right arm is raised, his index finger pointing, as if giving an order or sighting land. Columbus wears a short tunic; a wide belt wraps the waist; a second belt across the hip holds a sword. A short full cloak billows out around the figure, and he wears a brimmed hat. There is a coil of line at his feet." The square base is inscribed with "Columbus" on the front, "1492" on the right side and "1893" on the left side.

The statue is in good overall condition, but has some very small cracks in the figure and the tail ends of the bronze swag are missing. The base is also in good condition with only some chipping on the lower edge of the base being noted in the nomination.

The National Register of Historic Places nomination lists the Columbus statue under both criteria A and C. Criterion A requires that the property must make a contribution to the major pattern of American history, and criterion C concerns the distinctive characteristics of its architecture and construction, including having great artistic value or being the work of a master. The basis for meeting criterion A is that the work is an example of the Gorham Manufacturing Company's large statue. Columbus was listed under criterion C as an example of the work of Auguste Bartholdi's work. The statue has not been moved from its original location, but the "significance of the work is not dependent upon its setting but is encompassed within the object itself." Columbus was added to the National Register of Historic Places on October 19, 2001.

Though it is a bronze cast copy of the original silver work, the sculpture itself was declared a masterpiece because "[l]ife and vigor are implied in every line and feature, and the general effect is one of great beauty." In relation to the original silver cast, James Wilson Pierce declared it as an exemplary work of art that surpasses all other Christopher Columbus sculptures in the United States.

All content from Kiddle encyclopedia articles (including the article images and facts) can be freely used under Attribution-ShareAlike license, unless stated otherwise. Cite this article:
Statue of Christopher Columbus (Providence, Rhode Island) Facts for Kids. Kiddle Encyclopedia.