Statue of the Earl Mountbatten, London facts for kids

A bronze statue of Admiral of the Fleet Louis Mountbatten, 1st Earl Mountbatten of Burma is located on Mountbatten Green, off Horse Guards Road, Whitehall, London, England. The sculptor was Franta Belsky and the work was unveiled in 1983.

The statue is 9 foot 5 inches high and depicts Lord Mountbatten in his admiral's uniform, displaying his honours including the Order of the Garter, and holding binoculars in his right hand. Hidden in the left leg of the statue is a jam jar containing coins, press cuttings and details of the sculptor's commission. The inscription on the north side of the plinth gives Lord Mountbatten's retiring rank, title, honours and year of birth and death. The inscription on the west side lists the positions of Chief of Combined Operations (1941–1943) and Supreme Allied Commander in South East Asia (1943–1946) he held during the Second World War. 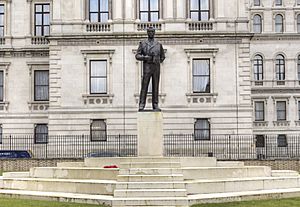 Calls for a memorial to Mountbatten began in the Letters pages of The Times in November 1979; in July 1981 a further letter in support of the proposal was published, which was signed by the Prime Minister Margaret Thatcher, leaders of opposition parties and members of the armed forces. The Queen, Elizabeth II, chose the location for the statue and the matter was considered by the government in 1982. The £100,000 for the memorial was raised by public subscription.

The statue was put in place in October 1983 and the area remained under heavy guard until the formal ceremony on 2 November. The Times reported that among the 1500 guests were "most of the British royal family and 13 crowned heads from Europe". In unveiling the statue, the Queen referred to Lord Mountbatten as "Uncle Dickie" and said:

The vitality and force of his personality combined with an astonishing range of abilities. He could be far-sighted with enormous breadth of vision yet he could also concentrate in the minutest detail of any problem. He was a perfectionist who always mastered his subject.

This was followed by a dedication performed by Gerald Ellison, the Bishop of London.

Public access to the green where the statue stands was prohibited due to security concerns in 2001.

All content from Kiddle encyclopedia articles (including the article images and facts) can be freely used under Attribution-ShareAlike license, unless stated otherwise. Cite this article:
Statue of the Earl Mountbatten, London Facts for Kids. Kiddle Encyclopedia.