The Steam Railroading Institute is located at 405 South Washington Street, Owosso, Michigan. It was founded in 1969 as the Michigan State University (MSU) Railroad Club. It became the Michigan State Trust for Railway Preservation, and later adopted its present name.

The Steam Railroading Institute, dedicated to educating the public about steam-era railroad technology, is the product of the Michigan State Trust for Railway Preservation Inc. For many years, the MSTRP centered on a single steam locomotive, former Pere Marquette Railway No. 1225. After 1225's retirement, the locomotive was donated to Michigan State University. Chesapeake and Ohio Railroad Chairman Cyrus Eaton thought that the University College of Engineering ought to have a piece of real equipment to work on and convinced the MSU University Trustee Forest Akers that this was a good idea. Eaton didn't like seeing these relatively new locomotives cut up for scrap. The Dean of the College of Engineering was not convinced, so then University President John Hannah, accepted the engine as a contribution to the MSU Museum. It arrived on campus in 1957. There it sat, getting an occasional coat of paint and was opened to the public on football weekends until 1969 when a group of students took an interest in the locomotive. The Michigan State University Railroad Club was formed by student rail fans who were interested in Trains and Locomotives in general. In 1970 at the suggestion of Randy Paquette, they adopted the ambitious goal of restoring 1225 and using it to power excursion trains that would bring passengers to football games at the university. After toiling away at the locomotive for many years, the Michigan State University Railroad Club evolved as the Michigan State Trust for Railway Preservation after then MSURRC President Chuck Julian discussed the subject of how this engine would run when finished, with then University President Edgar Harden. Harden proposed that they form a 501(c)(3) that would allow the University to give the Trust the locomotive. MSU had no interest in running a steam locomotive. The MSTRP started its corporate run in July 1979. Harden kept his promise and had the University donate the locomotive to this new organization.

In the past thirty-five years the Michigan State Trust for Railway Preservation and its Steam Railroading Institute have grown tremendously, now housing two steam locomotives, a fleet of passenger cars, and numerous pieces of rolling stock.

Situated on the site of the old Ann Arbor Railroad's steam backshop and roundhouse, the Steam Railroading Institute exhibits the intricacies of working steam locomotives. 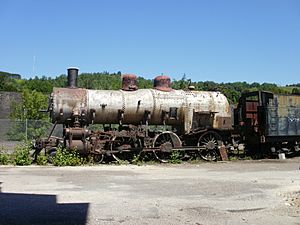 CNW 175 at its old site, the Quincy Smelter

The SRI has a few new and historic structures including an original PM turntable and an old Ann Arbor Freight house.

The turntable is an original 90 ft (27 m) PM turntable built in 1919 to serve the Pere Marquette railyard in New Buffalo, Michigan. It operated and served a 16 stall roundhouse for many years until Chessie System took over in 1984 and ceased operations at the New Buffalo yard. The SRI acquired the turntable and had it relocated to the site. Upon purchasing, the SRI added an additional 10 ft (3.0 m) to the turntable to better accommodate larger rolling stock like the PM 1225. Still functioning like it did during the steam era, the turntable was used by the 1225 during its service years on the PM many times despite its short length.

The SRI Visitor Center is located inside a renovated freight warehouse used by the Ann Arbor road. Its construction date is unclear but the foundation dates back to the 1880s. It is speculated that the original one burned down in the 1920s and the existing structure was built. Originally a creamery, the Ann Arbor used for freight storage for things like grain. Bruckman's Moving and Storage then leased the building from the railroad for storage use. The SRI purchased the building in 2004 and renovated it as their Visitor's Center containing exhibits, a model train layout, and the museum's artifact and archives collection.

All content from Kiddle encyclopedia articles (including the article images and facts) can be freely used under Attribution-ShareAlike license, unless stated otherwise. Cite this article:
Steam Railroading Institute Facts for Kids. Kiddle Encyclopedia.