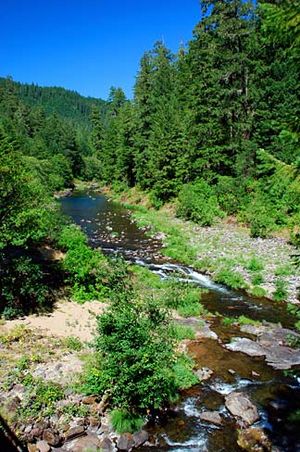 The North Umpqua and its tributaries renowned for its prolific runs of summer steelhead, including a high percentage of native fish. Steamboat Creek has been closed to fishing since 1932.

The watershed of the creek was extensively clearcut during the late 1950s and 1960s until forestry practices were changed. The recovery of the river, including the anadromous fish population is closely monitored as a test case for riparian habitat management.

All content from Kiddle encyclopedia articles (including the article images and facts) can be freely used under Attribution-ShareAlike license, unless stated otherwise. Cite this article:
Steamboat Creek (Umpqua River tributary) Facts for Kids. Kiddle Encyclopedia.