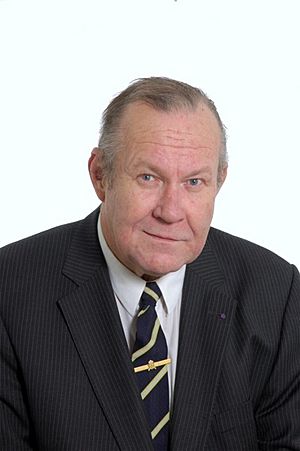 He was a Lieutenant colonel, and had previously been a member of the Moderate Party and the Centre Party. Bojerud was the 22nd candidate on the list of SD in the 2010 parliamentary election. In 2010-2011 he was serving as a MP replacing Julia Kronlid during her absence for having a child.

Following the death of William Petzäll in 2012 (who had been elected to parliament on the SD list), Bojerud became a member of parliament.

All content from Kiddle encyclopedia articles (including the article images and facts) can be freely used under Attribution-ShareAlike license, unless stated otherwise. Cite this article:
Stellan Bojerud Facts for Kids. Kiddle Encyclopedia.