Stepaside (Irish: An Chéim) is an area of Dublin located in Dún Laoghaire–Rathdown, Ireland.

A suburb of Dublin, Stepaside lies on the R117 regional road to the south-east of the city, at the foot of Three Rock Mountain. The area is located just off Junction 14 of the M50 motorway. Neighbouring areas include Sandyford, Kilternan, Ballyogan, Leopardstown, Carrickmines and Glencullen.

Stepaside village developed in the 18th and early 19th Centuries when the adjacent medieval settlement of Kilgobbin was bypassed by a new stretch of the Enniskerry Road, built from what is now Lamb's Cross through to Kilternan. Stepaside became a new staging post along this route, while Kilgobbin Road with its Coaching Inn (now Oldtown House) was no longer used by goods traffic or stage coaches.

Stepaside is served by Dublin Bus routes 44, 47 and 118 The Luas Green Line has been extended to Cherrywood and the nearest stops (Glencairn or The Gallops) are approx 2 kilometres from the centre of Stepaside. 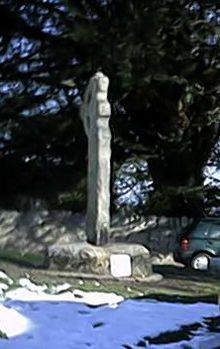 Since 2002 the Stepaside area has witnessed an extensive homebuilding programme and an accompanying large growth in population. Previously a separate rural village, it has been absorbed by the Dublin conurbation to the north and east. Dún Laoghaire-Rathdown County Council recently announced plans to build a community park for the Carrickmines, Ballyogan, and Stepaside areas at a cost of €40 million. A large civic centre is currently being built and the park will be named after Samuel Beckett.

Stepaside contains several shops and pubs. The Step Inn, The Stone Grill, The Box Tree, The Wine Room, and Quattro provide choice in dining. In recent times a new medical practice, 'Stepaside Medical', an Opticians practice 'Stepaside Eyecare' and Mulvey's Pharmacy have opened in the village providing easy access to healthcare for the locality. The area is situated 4 kilometres south of Dundrum.

All content from Kiddle encyclopedia articles (including the article images and facts) can be freely used under Attribution-ShareAlike license, unless stated otherwise. Cite this article:
Stepaside, Dublin Facts for Kids. Kiddle Encyclopedia.