Steven Levy (born 1951) is an American journalist who has written several books on computers, technology, cryptography, the Internet, cybersecurity, and privacy.

7 Commandments of the Personal Computer Revolution

1. Access to Computers - and anything that might teach you something about the way the world works - should be unlimited and total.

2. Always yield to the Hands-on Imperative.

3. All information should be free.

5. Hackers should be judged by their hacking, not bogus criteria such as degrees, age, race,or position.

6. You can create art and beauty on a computer.

7. Computers can change your life for the better. 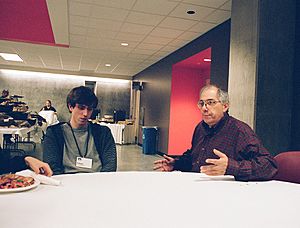 Levy is a senior writer for Wired. Previously, he was chief technology writer and a senior editor for Newsweek. Levy has had articles published in Harper's, Macworld, The New York Times Magazine, The New Yorker, Premiere, and Rolling Stone. He is regarded (along with Walter Mossberg) as a prominent and respected critic of Apple Inc.. In July 2004, Levy wrote a cover story (which also featured an interview with Apple CEO Steve Jobs) which unveiled the 4th generation of the iPod to the world before Apple had officially done so, an unusual event since Apple is well known for its tight-lipped press policy.

Levy has won several awards, including the "Computer Press Association Award" for a report he co-wrote in 1998 on the Year 2000 problem.

In 1978, Steven Levy rediscovered Albert Einstein's brain in the office of the pathologist who removed and preserved it. [1]

In 1984, he wrote a book called Hackers: Heroes of the Computer Revolution, in which he described a “hacker ethic”, which became a guideline to understanding how computers have advanced into the machines that we know and use today. He identified this Hacker Ethic to consist of key points such as that all information is free, and that this information should be used to “change life for the better”.

Levy received his bachelor's degree from Temple University and earned a Master's degree in literature from Pennsylvania State University. He lives in New York City with his wife, Pulitzer Prize winner Teresa Carpenter, and son.

All content from Kiddle encyclopedia articles (including the article images and facts) can be freely used under Attribution-ShareAlike license, unless stated otherwise. Cite this article:
Steven Levy Facts for Kids. Kiddle Encyclopedia.