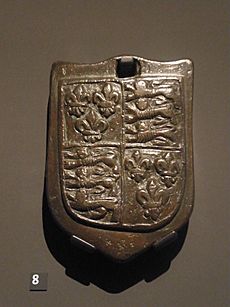 A 16th-century bronze 1 stone weight emblazoned with the English coat of arms.

The stone is a unit for measuring mass in the Imperial system. It is equal to fourteen pounds. 160 stone make up a long ton. In the metric system, 1 stone = 6.35029318 kilograms.

The short way of writing stones is st.

The stone was outlawed in Ireland and the United Kingdom, in 1983 and 1985 respectively. However stones and pounds remains the sole unit that all people measure their weight in. The unit flourishes in all non official uses: media, sports &ct. Often in American-British boxing matches, the contenders  weight is stated in pounds then stones and pounds. The same in horse racing.

All content from Kiddle encyclopedia articles (including the article images and facts) can be freely used under Attribution-ShareAlike license, unless stated otherwise. Cite this article:
Stone (unit) Facts for Kids. Kiddle Encyclopedia.