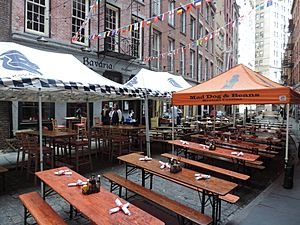 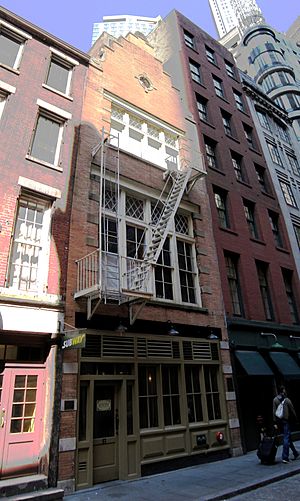 57 Stone Street, built in 1903 in the Dutch Colonial Revival style

Stone Street is a short street in the Financial District of Manhattan, New York City. It originally ran from Broad Street to Hanover Square but was divided into two sections by the construction of the Goldman Sachs building at 85 Broad Street in the 1980s. The cluster of historic buildings along Stone, South William, and Pearl Streets and Coenties Slip forms the Stone Street Historic District.

Stone Street is one of New York's oldest streets. It was originally known by its Dutch name, Hoogh Straet (High Street). In 1632, the Dutch West India Company built the first commercial brewery in North America there. Around 1656, Hoogh Straet was shifted about 20 to 25 feet (6.1 to 7.6 m) to align it with Brouwer Street, the extension of Hoogh Straet west of the Gracht (later, Broad Street), and which in 1658 became the first paved street in Nieuw Amsterdam. Following the British conquest of the colony, the name Hoogh Straet was translated to High Street, and then called Duke Street, for the Duke of York during most of the 18th century. Leveled in 1771 and surveyed in 1790, it was renamed Stone Street in 1794 because of its cobblestone paving, as New Yorkers abandoned reminders of British rule. The street's stores and lofts were built for dry-goods merchants and importers shortly after the Great Fire of 1835, which destroyed much of New Amsterdam.

Most buildings were used as storage. The building at 57 Stone Street was rebuilt in 1903 by C. P. H. Gilbert in Dutch Colonial Revival architecture at the behest of the owner, Amos F. Eno, a son of Amos R. Eno. The buildings to the back on South William Street 13-23 also were reconstructed in the Dutch revival style, evoking New Amsterdam.

Following many decades of neglect, a joint partnership between the Landmarks Preservation Commission and other city agencies, the Alliance for Downtown New York and Stone Street owners has transformed Stone Street from a derelict back alley into one of Downtown's liveliest scenes. Restored buildings, granite paving, bluestone sidewalks and period street lights set the stage for the half dozen restaurants and cafes, whose outdoor tables are very popular on warm summer nights.

The eastern portion of the street and the surrounding buildings have been protected since 1996 by the New York City Landmarks Preservation Commission as the Stone Street Historic District, and is pedestrian-only. The historic district is now populated by several restaurants and bars and has outdoor dining when the weather permits.

The India House historic landmark is located at the Hanover Square end of the street.

All content from Kiddle encyclopedia articles (including the article images and facts) can be freely used under Attribution-ShareAlike license, unless stated otherwise. Cite this article:
Stone Street (Manhattan) Facts for Kids. Kiddle Encyclopedia.