In 1988, Homart, then a subsidiary of Sears, planned on putting a million square foot mall in Frisco, which was a town of about 6,000 people at the time.

When Plano city officials learned of Homart's plan, they offered $10 million if the company would move its planned mall across the road into their city limits. Frisco lobbied to keep the planned mall and was able to work out tax incentives to close the deal. Plano then convinced another company, General Growth Properties, to place a mall within their city limits. In 1995, General Growth acquired Homart who had already signed an agreement with Frisco. The City of Frisco made a final offer to General Growth of a half-cent sales tax rebate, property tax abatement for ten years, and infrastructure improvements in and around the mall. Plano continued to lobby hard for the new mall and Frisco eventually upped its sales-tax grant. Frisco finally opened the mall on August 4, 2000.

In 2015, Sears Holdings spun off 235 of its properties, including the Sears at Stonebriar Centre, into Seritage Growth Properties.

In 2016, the Mall’s AMC Theatre located on the upper levels was closed for 3 months for updating and remodeling.

In May 2018, construction began on the 18 story Stonebriar Hyatt Hotel, which would be attached to the mall.

In January 2019, Sears closed its doors as part of Sears Holdings filing for Bankruptcy.

In April 2019, Apple Store closed its store at the mall and relocated to the Galleria Dallas.

In November 2019, Amazons 6th Amazon 4 Star store in the U.S. opened at Stonebriar.

The following are the anchor stores of the mall: 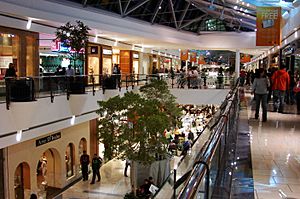 All content from Kiddle encyclopedia articles (including the article images and facts) can be freely used under Attribution-ShareAlike license, unless stated otherwise. Cite this article:
Stonebriar Centre Facts for Kids. Kiddle Encyclopedia.