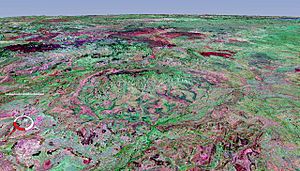 Strangways is a large impact structure, the eroded remnant of a former impact crater, located in the Northern Territory of Australia about 65 kilometres (40 mi) east-south-east of the town of Mataranka. It was named after the nearby Strangways River. The location is remote and difficult to access. Its age has been determined as approximately 646 Ma.

The circular topographic feature that marks the site was originally thought to be volcanic, with an impact origin first proposed in 1971 after the discovery of evidence diagnostic of impact including shatter cones and shocked quartz. The circular topographic feature is about 16 km (9.9 mi) in diameter and lies within Mesoproterozoic sedimentary rocks of the McArthur Basin. However, this is only a relic of the original crater after considerable erosion. Estimates of the original rim diameter vary between different researchers in the range 24–40 km (15–25 mi); the Earth Impact Database prefers a diameter of 25 km (16 mi). The age of the impact event has been determined at 646 ± 42 Ma (Neoproterozoic) based on radiometric dating of impact melt rocks.

In 1996, the crater's site was listed on the now-defunct Register of the National Estate.

All content from Kiddle encyclopedia articles (including the article images and facts) can be freely used under Attribution-ShareAlike license, unless stated otherwise. Cite this article:
Strangways crater Facts for Kids. Kiddle Encyclopedia.