Strata SE1 is a 148-metre (486 ft), 43-storey building at Elephant & Castle in the London Borough of Southwark. Designed by BFLS (formerly Hamiltons), it is one of the tallest residential buildings in London and more than 1,000 residents live in its 408 flats.

At the time of construction there was an attempt by journalists to nickname the building "The Razor", and "The Electric Razor",. Boris Johnson, then Mayor of London, called it "The Lipstick", while describing it as a building "with a bit of oomph about it". None of these nicknames seriously caught on with local residents, however.

Strata SE1 is located on the site of Castle House, an early 1960s six-storey office building, which was the first commercial premises at the newly rebuilt Elephant & Castle. When completed, Castle House was warmly received. The Architects' Journal in August 1962 found "little to criticise and much to praise and until New Zealand House is completed it is possibly one of the best examples for anyone wanting to look at a good office block in London."

25% of the building's flats were sold by Family Mosaic Housing Association (later incorporated into the Peabody Trust, which is now the landlord for the flat still under the shared-ownership regime) for shared-ownership sale. These consist of the "Esprit Apartments" — located on floors 2–10 of the tower — and a further nine flats in the adjacent "Pavilion", a three-storey structure located to the west of the tower and earmarked for former residents of the nearby Heygate Estate.

Only the open-market flats have access to car-parking (in the basement of the building). The 39th floor features a "Sky Lobby" (a small corridor with a view over central London), while the living area is topped by a £2.5m three-bedroom duplex penthouse. The ground floor comprises two commercial units. A third one is located in the Pavilion, along with a "kiosk".

The top of the building features three wind turbines, although they are rarely used. The one-level basement of the building contains a secure car park and 437 bicycle storage places. 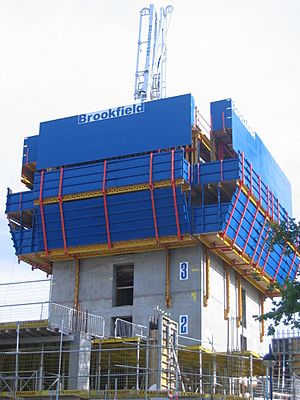 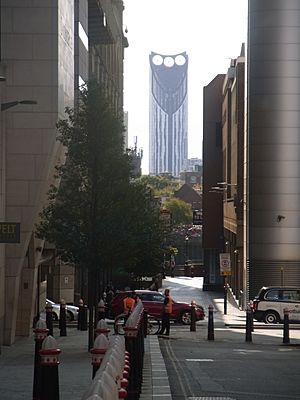 Strata as seen from Cannon Street, City of London, September, 2020

The current tower was first proposed in 2005; construction began in 2007 and was completed in June 2010. The cost is estimated at £113.5 million. The building was 'topped out' in June 2009. Attended the topping out ceremony were over 70 senior members of London's business community including Sir Simon Milton, Deputy Mayor for Policy and Planning, Cllr Nick Stanton, Leader of Southwark Council and MP for North Southwark and Bermondsey, Simon Hughes. The turbines were installed in May 2010.

During the demolition of Castle House to clear land for Strata, a construction worker, John Walker, 33, father of two was killed when a roof collapsed on him. He was employed by 777 Demolition and Haulage Company Ltd, which was served with a Prohibition Notice by the Health & Safety Executive. An inquest was due to be held at Inner London South Coroner's Court. In November 2015, both companies were fined several hundred thousand pounds as a result of their negligence.

Strata SE1 was one of the first buildings in the world to incorporate wind turbines as part of its structure. Rambøll, the engineering consultancy involved with the Bahrain World Trade Center, which also features wind turbines, was involved in the project.

The three 9-metre (30 ft) wind turbines at the top of the building are rated at 19 kW each and were anticipated to produce a combined 50MWh of electricity per year, enough to power 8% of the energy needs of the building, sufficient to supply the building's communal areas. The turbines were criticised as "greenwashing" by the panel of the 2010 Carbuncle Cup, and residents were reporting in 2010 that the turbines barely moved. In 2014, the Guardian reported that the turbines had "remained stationary ever since".

In 2010, the building exceeded by 13% the then-current UK regulations relating to sustainability, whilst overall carbon emissions were expected to be 15% lower than the Mayor of London's good practice benchmark. The developers expected that the building would achieve 2050 CO2 target emissions and that (with the Multi-Utility Services Company in place in the area) it would achieve a predicted 73.5% reduction in CO2 emissions when measured against the Building Regulations benchmark.

Featured on-site is a combined heat and power system to provide sustainable power generation, with a provision for the collection of rainwater for re-use. The energy costs per flat are envisaged to be up to 40% less than Britain's typical housing average. The building is clad in a "bespoke high thermal performing façade" with an air permeability leakage rate that is apparently 50% better than current building regulations. 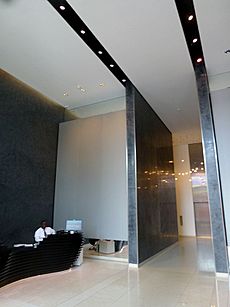 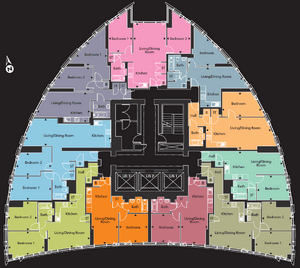 On 12 November 2010, the building was the overall winner of the 2010 Concrete Society Awards, ahead of schemes from David Chipperfield, Hopkins Architects, Caruso St John, McInnes Usher McKnight Architects (MUMA) and Alsop Architects. The judges commented: "This building is striking architecturally, a considerable feat of construction on this restricted site...". They particularly singled out Strata's "innovative column strategy".

In May 2011, the building was shortlisted for the ICE London Civil Engineering Awards 2011 for infrastructure and building projects. The award "celebrates outstanding engineering achievement by companies, organisations, and individuals in the capital".

The Strata Inhabit website (the information site for residents of the building) won "Website of the Year" at the News on the Block Property Management Awards on 5 December 2011. 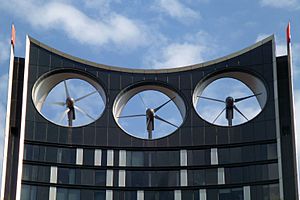 Detail of the wind turbines

In August 2010, Strata SE1 was awarded the 2010 Carbuncle Cup. The yearly award, organized by Building Design magazine, selects one building from a shortlist of 30, nominated by readers. It recognises "the ugliest building in the United Kingdom completed in the last 12 months".

On 2 April 2012, the building appeared in a list of the world's 21 ugliest buildings on the Daily Telegraph's website.

In March 2014, an Ipsos MORI poll for New London Architecture of 500 members of the public aged 16–64 declared Strata SE1 Londoners' fifth favourite tall building, behind 30 St Mary Axe (The Gherkin), The Shard, The Leadenhall Building (The Cheesegrater) and One Canada Square (Canary Wharf).

All content from Kiddle encyclopedia articles (including the article images and facts) can be freely used under Attribution-ShareAlike license, unless stated otherwise. Cite this article:
Strata SE1 Facts for Kids. Kiddle Encyclopedia.