List of tallest buildings and structures in London facts for kids 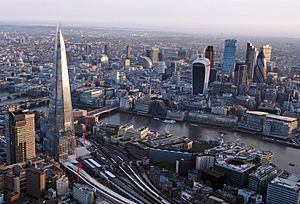 London in 2014, featuring the Shard and the City of London skyline 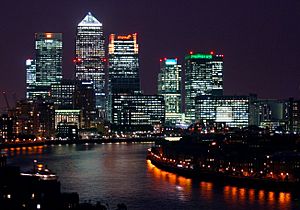 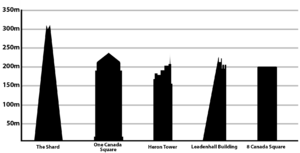 This list of the tallest buildings and structures in London ranks skyscrapers and towers in London by their height. Since 2010, the tallest structure in London has been The Shard, which was topped out at 309.6 metres (1,016 ft), making it the tallest habitable building in Europe at the time. The second tallest is One Canada Square in Canary Wharf, which rises 235 metres (771 ft) and was completed in 1991. The third tallest is the Heron Tower in the City of London financial district, which was topped out in 2010 and stands at a height of 230 metres (755 ft), including its spire.

The Greater London area is currently about level with the Paris Metropolitan Area as the metropolitan area in the European Union with the most skyscrapers. As of 2016, there are 18 skyscrapers in London that reach a roof height of at least 150 metres (492 ft), with 19 in Paris (compared to 15 in Frankfurt, eleven in Warsaw and five each in Madrid and Milan).

Few skyscrapers were built in London before the late 20th century, owing to restrictions on building heights originally imposed by the London Building Act of 1894, which followed the construction of the 14-storey Queen Anne's Mansions. Though restrictions have long since been eased, strict regulations remain to preserve protected views, especially those of St Paul's, the Tower of London and Palace of Westminster, as well as to comply with the requirements of the Civil Aviation Authority.

The lifting of height restrictions caused a boom in the construction of tall buildings during the 1960s. One of London's first notable tall buildings was the 117-metre (384 ft) Centre Point, completed in 1966. The National Westminster Tower (now called Tower 42) followed in 1980, which at 183 metres (600 ft) became London's first genuine "skyscraper" by international standards. It was followed in 1991 by One Canada Square, which formed the centrepiece of the Canary Wharf development. Following a 10-year gap, several new skyscrapers appeared on London's skyline: 8 Canada Square, 25 Canada Square (both also at Canary Wharf), the Heron Quays buildings, One Churchill Place, the Broadgate Tower and the gherkin-shaped 30 St Mary Axe. Some of the awards given to 30 St Mary Axe include the Emporis Skyscraper Award in 2003 and the RIBA Stirling Prize for Architecture in 2004.

With the precedent set by the towers of Canary Wharf and with the encouragement of former Mayor of London Ken Livingstone, a renewed trend for building tall has been established in recent years. As of September 2016, there were 79 structures under construction or proposed in London that will rise at least 100 metres in height, including the South Bank tower which has been increased in height by 11 storeys, architecturally topping out in 2016. 1 Undershaft, planned to form the centrepiece of the City of London's skyscraper cluster, is the tallest skyscraper currently proposed for London. Also in the City, a skyscraper at 100–112 Leadenhall Street, to be designed by SOM architects, is in the early stages of design and planning.

This list ranks externally complete London skyscrapers and free-standing towers that stand at least 328 feet (100 m) tall, based on standard height measurement. This includes spires and architectural details but does not include antenna masts. An equals sign (=) following a rank indicates the same height between two or more buildings. The "Year" column indicates the year in which a building was completed.

* Indicates still under construction, but has been topped out

Selection of buildings that dominate the London Skyline, including some still under construction or on hold.

Tallest under construction, approved, and proposed

This lists buildings that are approved for construction in London and are planned to rise at least 328 feet (100 m).

* Table entries without text indicate that information regarding a building's expected year of completion has not yet been released.

This lists buildings that are proposed for construction in London and are planned to rise at least 328 feet (100 m). Once a planning application has been submitted, a decision by the relevant authority may take two or three years. 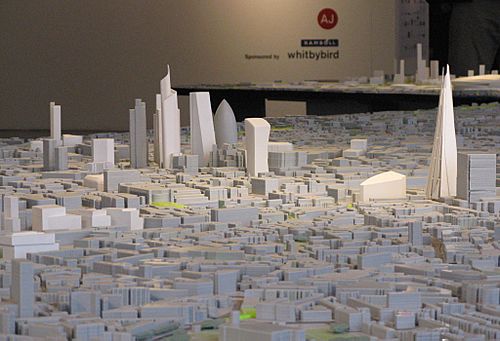 Scale models of the skyscrapers planned for Central London. (2012)

This lists all demolished buildings in London that stood at least 328 feet (100 m) tall.

Timeline of tallest buildings and structures 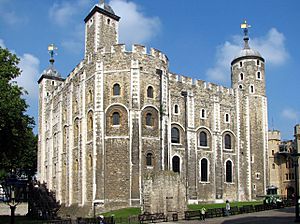 The White Tower stood as the tallest structure in London from 1098 until 1310.

This lists free-standing structures that have at some point held the title of tallest structure in London.

All content from Kiddle encyclopedia articles (including the article images and facts) can be freely used under Attribution-ShareAlike license, unless stated otherwise. Cite this article:
List of tallest buildings and structures in London Facts for Kids. Kiddle Encyclopedia.