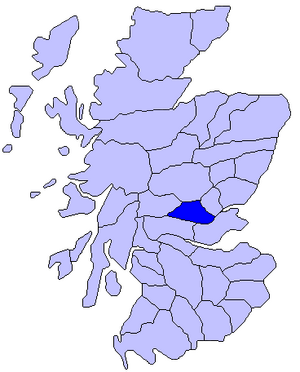 Map of Scotland showing the province of Strathearn

Strathearn or Strath Earn ( from Scottish Gaelic: Srath Èireann) is the strath of the River Earn, in Scotland, extending from Loch Earn in the West to the River Tay in the east. The region formed a traditional province of Scotland, and hence had a mormaer and then an Earl. The province was bounded on the north by Atholl, north west by Breadalbane, south west by Menteith, south east by Fife, and on the east by Perthia.

In medieval times, Strathearn was part of the region administered by the sheriff based at Perth. When 19th century local government reforms replaced the ancient provinces by new Counties (shires), based on sheriffdom boundaries, Strathearn, therefore, became the south-central part of Perthshire. As a result of late 20th century reforms, it is now part of Perth and Kinross.

Royal dukedoms of Cumberland and Strathearn, of Kent and Strathearn and of Connaught and Strathearn have been awarded to members of the British Royal Family. Prince William was created Earl of Strathearn, as a subsidiary title to Duke of Cambridge, on 29 April 2011, the day of his wedding to Catherine Middleton.

"Strathearn" / "Strathern" is also a surname in the United States and Northern Ireland, predominantly in the Bellaghy area of County Londonderry.

All content from Kiddle encyclopedia articles (including the article images and facts) can be freely used under Attribution-ShareAlike license, unless stated otherwise. Cite this article:
Strathearn Facts for Kids. Kiddle Encyclopedia.