Kids Encyclopedia Facts
This page is about the children's book. For the musical opera by The Tiger Lillies, see Shockheaded Peter (musical).

Der Struwwelpeter ("shock-headed Peter" or "Shaggy Peter") is an 1845 German children's book by Heinrich Hoffmann. It comprises ten illustrated and rhymed stories, mostly about children. Each has a clear moral that demonstrates the disastrous consequences of misbehavior in an exaggerated way. The title of the first story provides the title of the whole book. Der Struwwelpeter is one of the earliest books for children that combines visual and verbal narratives in a book format, and is considered a precursor to comic books.

Der Struwwelpeter is known for introducing the character of the Tailor (or Scissorman) to Western literature. Some researchers now see the stories in the book as illustrations of many child mental disorders that we know about today. 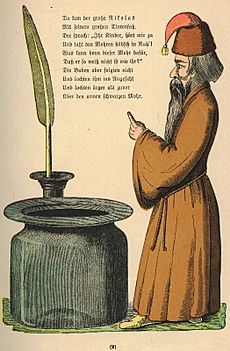 Nikolas, as he is about to dunk three boys in his inkstand. Illustration from a 1917 edition. 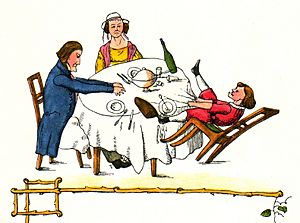 A British production of Shockheaded Peter, with Kate Bishop, Lawrence Grossmith, George Grossmith Jr., Beatrice Terry, and the 11-year-old Marie Lohr, was produced in London at the Garrick Theatre in 1900.

A ballet of Der Struwwelpeter with music composed by Norbert Schultze was produced in Germany before World War II.

A live action film based on the book was released in Germany in 1955. Directed by Fritz Genschow, in this adaptation there is a "happy" ending where the characters' bad deeds are reversed.

Little Suck-a-Thumb (1992) is a psychosexual interpretation of the infamous cautionary tale. The short film by writer/director David Kaplan stars Cork Hubbert and Evelyn Solann, with Jim Hilbert as the Great Tall Scissorman.

"The Misadventures of Stuwwelpeter" for tenor and piano (also orchestrated for chamber ensemble) was composed by Michael Schelle in 1991. Five of the stories are included in the original version with piano. "Inky Boys" is included only in the chamber version.

Struwwelpeterlieder (1996) is a setting of three of the stories for soprano, viola and piano by American composer Lowell Liebermann.

Shockheaded Peter (1998) is a British musical opera by The Tiger Lillies. that combines elements of pantomime and puppetry with musical versions of the poems with the songs generally following the text. It won a number of British theatre awards in the years following its release.

"Hilf Mir" is a song by Rammstein released in 2005; it is based on Die gar traurige Geschichte mit dem Feuerzeug.

The Scissorman story is adapted into comics form by Sanya Glisic in The Graphic Canon, Volume 2, published in 2012. 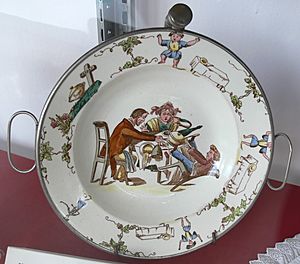 One of the stories in the 1896 edition of Max Beerbohm's A Christmas Garland ("A Vain Child") centres around the story of "Johnny Look-in-the-Air"; the narrator summarises the story, goes to Germany to look for his scarlet book, and ends with the story being taken from the allegorical point of view concerning the narrator's eventual downfall from journalism.

And now with sudden swift emergence
Come the women in dark glasses, the humpbacked surgeons
And the Scissor Man.

Adolf Hitler was parodied as a Struwwelpeter caricature in 1941 in a book called Struwwelhitler, published in Britain under the pseudonym Dr. Schrecklichkeit (Dr. Horrors).

The "Story of Soup-Kaspar" is parodied in Astrid Lindgren's Pippi Longstocking (1945), with a tall story about a Chinese boy named Peter who refuses to eat a swallow's nest served to him by his father, and dies of starvation five months later.

Josephine Tey, in The Man in the Queue (Macmillan, 1953), describes a scene in which a character's hair is "spread round it by the force of gravity into a Struwwelpeter effect."

English illustrator Charles Folkard's imaginative study "A Nonsense Miscellany," published in 1956 in Roger Lancelyn Green's anthology The Book of Nonsense, by Many Authors, is a seaside scene that incorporated Baron Munchausen, Struwwelpeter, and a variety of characters from the works of Lewis Carroll and Edward Lear.

Agatha Christie references Struwwelpeter in her novel Curtain (Collins Crime Club, 1975). The story's narrator, Arthur Hastings, describes another character, Stephen Norton: "He had a habit of running his hands through his short grey hair until it stuck up on end like Struwwelpeter."

In Angela Carter's Nights at the Circus (1984), a hermit living by a frozen river in Siberia is described as having fingernails "as long as those of Struwwelpeter in the picture book".

Jamie Rix said that the book inspired him to create Grizzly Tales for Gruesome Kids when his publisher asked him to write more short stories about rude children. His mother had given him the book as a child and the stories gave him nightmares. Rix wanted to create a similar series of books for his children's generation.

Der Fall Struwwelpeter ("The Struwwelpeter Case"), 1989, by Jörg M. Günther is a satirical treatment in which the various misdeeds in the story - both by the protagonists and their surroundings - are analyzed via the regulations of the German Strafgesetzbuch.

The Jasper Fforde fantasy/mystery novel The Fourth Bear (Hodder & Stoughton, 2006) opens with a police sting operation by the Nursery Crime Division to arrest the Scissorman. 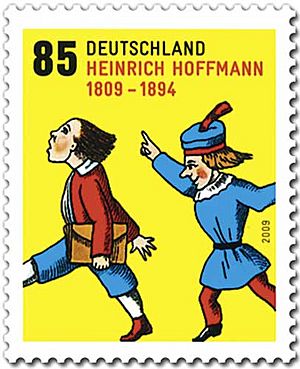 Comic book writer Grant Morrison references "Die Geschichte vom Daumenlutscher" in the first story arc of his Doom Patrol run with the recurring line, "The door flew open, in he ran / The great, long, red-legged scissorman." Doom Patrol member Dorothy Spinner, who has the ability to bring imaginary beings to life, considers among her imaginary friends the characters Flying Robert (a ghost baby balloon thing) and The Inky Boys.

The 2000 AD strip London Falling (June–July 2006), by Simon Spurrier and Lee Garbett, explores bogeymen from English folklore and mythology wreaking havoc in a modern-day setting. Two of the characters, Peter Struwwel and The Tailor, are taken from Der Struwwelpeter.

In the Wildstorm Comics series Top 10, one of the officers in the precinct is called Shock-Headed Pete, ostensibly in reference to his electrical powers.

In a 1991 edition of the Thames Television detective series Van der Valk, entitled "Doctor Hoffman's Children," the detective, played by Barry Foster, solves a series of murders after finding the book in the bedroom of his house, when his wife relates the tale of the scissorman to their granddaughter. The murders were all done in the style of events in the book.

Brief references are made to the book in the film Woman in Gold (2015), when the central character reminisces about her youth in Vienna during the Anschluss.

The Office references the book in Season 2, Episode 18: "Take Your Daughter to Work Day" (2006). Dwight Schrute reads The story of Johnny head-in-the-air and The story of the thumb sucker to the children, but is interrupted by a horrified Michael Scott.

Family Guy references the "Story of Little Suck-a-Thumb" in a cutaway gag in "Business Guy," the ninth episode in the eighth season, produced in 2009.

The German Group Ost+Front have on their album Adrenalin (2018) the song "Hans guck in die Luft". It is about a person's outlook on his past life and death. The song starts with a similar line as the poem.

The German Group Rammstein have on their album Rosenrot (2005) the song "Hilf Mir" "(Help Me)" . It is about a child whose parents are not at home. She discovers matches and sets herself on fire and burns completely. In the story, the girl's name is Pauline.

XTC took influence from the book for their song "Scissor Man". from 1979's Drums and Wires.

The British post-punk band Shock Headed Peters, formed in 1982, took their name from the story.

The author, Heinrich Hoffmann, worked as a physician and later on as psychiatrist. Some of his stories describe habits of children, which can be in extreme forms signs of mental disorders. Attention deficit hyperactivity disorder is called Zappel-Philip-Syndrom (Fidgety-Philip syndrome) colloquially in Germany. The story of the Suppen-Kaspar (Soup-Kaspar) is a case example of anorexia nervosa. Uncombable hair syndrome is also called Struwwelpeter syndrome, after the book title.

All content from Kiddle encyclopedia articles (including the article images and facts) can be freely used under Attribution-ShareAlike license, unless stated otherwise. Cite this article:
Struwwelpeter Facts for Kids. Kiddle Encyclopedia.