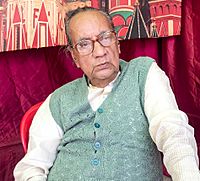 Sudhir Chakravarti (19 September 1934 – 15 December 2020) was a Indian anthropologist and essayist. He was born in Shibpur, British India.

Chakravarti was known for his research works on Folk religion, Lalan Fakir and Cultural Anthropology in Bengal. He spent 30 years researching the folk culture by traveling to different villages all over the West Bengal.

He was a professor of Bengali literature from 1958 to 1994. Chakravarti worked in Krishnagar Government College. He wrote and edited more than 85 books on many subjects like music, art, folk-religion, cultural anthropology. He was the editor of Bengali literary Magazine Dhrubapada.

Chakraborty died on 15 December 2020 in Kolkata, India from a heart attack at the age of 86.

All content from Kiddle encyclopedia articles (including the article images and facts) can be freely used under Attribution-ShareAlike license, unless stated otherwise. Cite this article:
Sudhir Chakraborty Facts for Kids. Kiddle Encyclopedia.