Widely celebrated as an epitome of religious tolerance, he was also accused of heresy during his lifetime and after his death. In his songs, Lalon envisioned a society where all religions and beliefs would stay in harmony.

Lalon founded the institute known as Lalon Akhrah in Cheuriya, about 2 kilometres (1.2 mi) from Kushtia railway station. His disciples dwell mostly in Bangladesh and West Bengal. Every year on the occasion of his death anniversary, thousands of his disciples and followers assemble at Lalon Akhrah, and pay homage to him through celebration and discussion of his songs and philosophy for three days.

In 2004, Lalon was ranked number 12 in BBC's poll of the Greatest Bengali of all time.

Everyone asks, "What religion does Lalon belong to in this world?"
Lalon answers, "What does religion look like?"
I've never laid eyes upon it.
Some use Malas (Hindu rosaries),
others Tasbis (Muslim rosaries), and so people say
they belong to a different religion.
But do you bear the sign of your religion
when you come (to this world) or when you leave (this world)?

“
”
— Lalon
[Edited to give a better translation]

Lalon's name as written, in a late 19th-century manuscript, by his disciple and scribe Bholai Shah, in unconventional Bengali orthography.

There are few reliable sources for the details of Lalon's early life as he was reticent in revealing his past. It is not known whether he was born in a Hindu or a Muslim family. Lalon had no formal education.

One account relates that Lalon, during a pilgrimage to the temple of Jagannath with others of his native village, he contracted smallpox and was abandoned by his companions on the banks of the Kaliganga River, from where Malam Shah and his wife Matijan, members of the weaver community in a Muslim-populated village, Cheuriya, took him to their home to convalesce. They gave Lalon land to live where he founded a musical group and remained to compose and perform his songs, inspired by Siraj Sain, a musician of that village. Lalon lost the sight of his one eye in smallpox. Researchers note that Lalon was a close friend of Kangal Harinath, one of the contemporary social reformers and was a disciple of Lalon.

Lalon lived within the zamindari of the Tagores in Kushtia and had visited the Tagore family. It is said that zamindar Jyotirindranath Tagore sketched the only portrait of Lalon in 1889 in his houseboat on the river Padma. Lalon died at Chheuriya on 17 October 1890 at the age of 118. The news of his death was first published in the newspaper Gram Barta Prokashika, run by Kangal Harinath. Lalon was buried at the middle of his dwelling place known as his Akhra.

How does the Unknown bird go,
into the cage and out again,
Could I but seize it,
I would put the fetters of my heart,
around its feet.
The cage has eight rooms and nine closed doors;
From time to time fire flares out;.
Above there is a main room,
The mirror-chamber 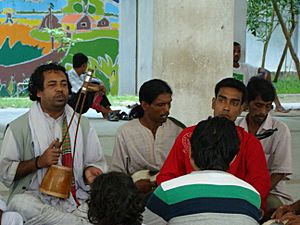 Lalon was against religious conflict and many of his songs mock identity politics that divide communities and generate violence. He even rejected nationalism at the apex of the anti-colonial nationalist movements in the Indian subcontinent. He did not believe in classes or castes, the fragmented, hierarchical society, and took a stand against racism. Lalon does not fit the "mystical" or "spiritual" type who denies all worldly affairs in search of the soul: he embodies the socially transformative role of sub-continental bhakti and sufism. He believed in the power of music to alter the intellectual and emotional state in order to be able to understand and appreciate life itself.

The texts of his songs engage in philosophical discourses of Bengal, continuing Tantric traditions of the Indian subcontinent, particularly Nepal, Bengal and the Gangetic plains. He appropriated various philosophical positions emanating from Hindu, Jainist, Buddhist and Islamic traditions, developing them into a coherent discourse without falling into eclecticism or syncretism. He explicitly identified himself with the Nadiya school, with Advaita Acharya, Nityananda and Chaitanya. He was greatly influenced by the social movement initiated by Chaitanya against differences of caste, creed and religion. His songs reject any absolute standard of right and wrong and show the triviality of any attempt to divide people whether materially or spiritually.

Lalon composed numerous songs and poems, which describe his philosophy. It is estimated that Lalon composed about 2,000 - 10,000 songs, of which only about 800 songs are generally considered authentic. Lalon left no written copies of his songs, which were transmitted orally and only later transcribed by his followers. Also, most of his followers could not read or write either, so few of his songs are found in written form. Rabindranath Tagore published some of the Lalon song in the monthly Prabasi magazine of Kolkata.

Among his most popular songs are

The songs of Lalon aim at an indescribable reality beyond realism. He was observant of social conditions and his songs spoke of day-to-day problems in simple yet moving language. His philosophy was expressed orally, as well as through songs and musical compositions using folk instruments that could be made from materials available at home; the ektara (one-string musical instrument) and the duggi (drum).

Songs of Lalon were mainly confined to the baul sects. After the independence of Bangladesh, they reached the urban people through established singers. Many of them started using instruments other than the ektara and baya. Some started using classical bases for a polished presentation to appeal to the senses of the urban masses.

According to Farida Parveen, a renowned Lalon singer, the pronunciation of the words were also refined in order to make their meanings clearer, whereas the bauls' pronunciations are likely to have local influence.

All content from Kiddle encyclopedia articles (including the article images and facts) can be freely used under Attribution-ShareAlike license, unless stated otherwise. Cite this article:
Lalon Facts for Kids. Kiddle Encyclopedia.