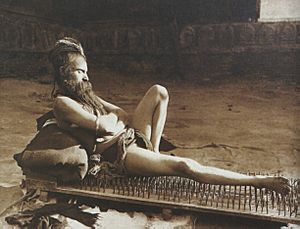 Herbert Ponting's 1907 photograph of "a fakir in Benares" (Varanasi), India

A fakir or faqir, is a Sufi who performs feats of endurance or magic. The word comes from faqr (Arabic: فقر‎), meaning "poverty".

In English, the word is often for Hindu ascetics (e.g., sadhus, gurus, swamis and yogis) as well as Sufi mystics. It can also be used to for a common street beggar who chants holy names, scriptures or verses. It has become a common Urdu and Hindi word for "beggar".

Many stereotypes of the great fakir exist, including a near-naked man easily walking barefoot on burning coals, sitting or sleeping on a bed of sharp nails, floating in the air while meditating, or "living on air" (refusing all food).

All content from Kiddle encyclopedia articles (including the article images and facts) can be freely used under Attribution-ShareAlike license, unless stated otherwise. Cite this article:
Fakir Facts for Kids. Kiddle Encyclopedia.