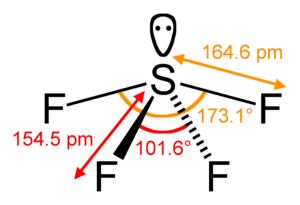 Sulfur tetrafluoride, also known as sulfur(IV) fluoride, is a chemical compound. Its chemical formula is SF4. It contains sulfur in its +4 oxidation state.

Sulfur tetrafluoride is a colorless gas. It is toxic and corrosive. It releases hydrogen fluoride when exposed to water.

It is made by reacting sodium fluoride, chlorine, and sulfur dichloride. The chlorine does not have to be included. If no chlorine is used, other products form that need to be taken out.

Sulfur tetrafluoride is used to make organic molecules containing fluoride ions. It is not used much.

All content from Kiddle encyclopedia articles (including the article images and facts) can be freely used under Attribution-ShareAlike license, unless stated otherwise. Cite this article:
Sulfur tetrafluoride Facts for Kids. Kiddle Encyclopedia.