Sulfur hexafluoride, also known as sulfur(VI) fluoride, is a chemical compound. Its chemical formula is SF6. It contains sulfur in its +6 oxidation state. It also contains fluoride ions.

BBC News says "It's the most powerful greenhouse gas known to humanity, and emissions have risen rapidly in recent years. Sulphur hexafluoride, or SF6, is widely used in the electrical industry to prevent short circuits and accidents. Leaks of the little-known gas in the UK and the rest of the EU in 2017 were the equivalent of putting an extra 1.3 million cars on the road".

Sulfur hexafluoride is a colorless, odorless gas. It is very heavy for a gas (about 5 times heavier than air). It is non reactive, and hard to find anything that reacts with it. It is a strong greenhouse gas. This has made people put some restrictions on using it.

It is made by reacting sulfur with fluorine. That combination also makes toxic disulfur decafluoride, which has to be removed. 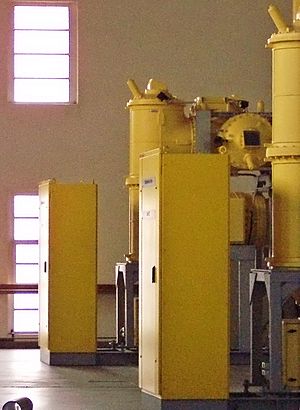 It is used in electronics and various electrical devices. It can be used in the body since it is not toxic. It can be used as a test gas to look where gas flows in a heater system, for example. It is detected easily. It is used in some torpedoes. Lithium is one of the only things that reacts with sulfur hexafluoride. Sulfur hexafluoride is sprayed on lithium. This makes the lithium very hot. It creates steam from water and shoots the torpedo. It can be breathed in to make the voice deeper. This is the opposite of breathing in helium gas. 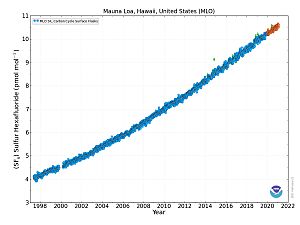 According to the Intergovernmental Panel on Climate Change, SF6 is the most potent greenhouse gas that it has evaluated, with a global warming potential (GWP) of 22,800 times that of CO2 when compared over a 100-year period. Measurements of SF6 show that its global average mixing ratio has increased by about 0.2 ppt per year to over 7 ppt. Sulfur hexafluoride is also extremely long-lived. It is inert in the troposphere and stratosphere. It has an estimated atmospheric lifetime of 800–3200 years. SF6 is very stable. (For countries reporting their emissions to the UNFCCC, a GWP of 23,900 for SF6 was suggested at the third Conference of the Parties: GWP used in Kyoto protocol). Average global SF6 concentrations increased by about seven percent per year during the 1980s and 1990s, mostly as the result of its use in the magnesium production industry, and by electrical utilities and electronics manufacturers. Given the low amounts of SF6 released compared to carbon dioxide, its overall contribution to global warming is estimated to be less than 0.2 percent.

In Europe, SF6 falls under the F-Gas directive which ban or control its use in several ways. Since 1 January 2006, SF6 is banned as a tracer gas and in all applications except high-voltage switchgear.

All content from Kiddle encyclopedia articles (including the article images and facts) can be freely used under Attribution-ShareAlike license, unless stated otherwise. Cite this article:
Sulfur hexafluoride Facts for Kids. Kiddle Encyclopedia.