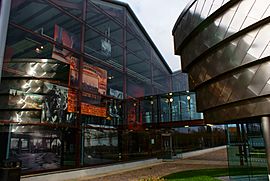 Summerlee Museum of Scottish Industrial Life, formerly known as Summerlee Heritage Park, is an industrial & social history museum in Coatbridge, North Lanarkshire, Scotland. It is situated on the site of the Victorian Summerlee Iron Works and the former Hydrocon Crane factory. The main Hydrocon factory building became the museum’s exhibition hall but it has been substantially changed and adapted since. The museum aims to show Lanarkshire's contribution to engineering, mining, steel working, weaving and farming, and also show the lives of the people of the area. It includes interactive displays and a temporary exhibition space.

Built in 1991-2, the miners' row, or "raw" shows typical workers' homes from the 1880s to the 1980s. In the row there is also a sweet shop selling old fashioned sweets and some of modern houses have gardens such as the 1940s house which has a wartime "dig for victory" garden with Anderson shelter. The row is used frequently as a location for filming.

In the late 1980s, the Summerlee Transport Group (STG) was formed, in order to support the maintenance and operation of the tramway. The original tramway used to terminate only 300 yards from the entrance at the timber shed, before the extension of the Gartsherrie Branch canal bridge and thence towards the Miners' Cottages. As continued tradition, the cars continued to halt at the timber shed before continuing over the bridge and around the bend; however, that tradition was discontinued in the late 2010s.

Whilst the first two operational trams at Summerlee were continental cars - Brussels 9062 and Graz 225 - it has always been the intention to use traditional British cars, preferably with local connections, which is now being realized.

There were also two donor cars on site, which were never operational purchased for their spare parts:

Oporto 150 was built in 1925 and remained in service there until 1993, when it was purchased by Summerlee for its truck and electrical equipment for Lanarkshire 53 during its restoration. The body was later scrapped.

All content from Kiddle encyclopedia articles (including the article images and facts) can be freely used under Attribution-ShareAlike license, unless stated otherwise. Cite this article:
Summerlee, Museum of Scottish Industrial Life Facts for Kids. Kiddle Encyclopedia.