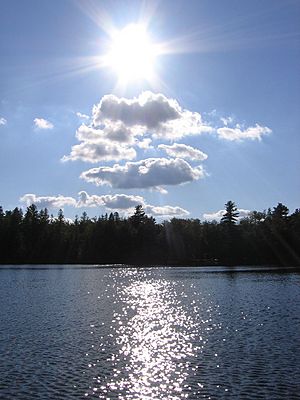 Sunfish Lake is a small, 25 hectare meromictic lake located north-west of Waterloo, Ontario, in the village of St. Agatha in northern Wilmot Township, and is the source of Laurel Creek. It is one of a few meromictic lakes in Ontario, that is, its deep bottom waters (21 metres or 70 feet) are totally devoid of oxygen. The surface and bottom layers do not mix, and the lake is vulnerable to environmental damage.

Restrictions on lake use include no motorized boats, no fertilizer or pesticide use, and regular septic tank inspections.

Sunfish Lake is often compared to Paradise Lake which is about 3 km to the north-west, in Wellesley Township. Paradise Lake is a much larger lake and accommodates many more properties with the ability to live year-round.

There are about 20 cottages and homes on the lake, of which only a small handful are zoned for year-round residence, the rest are zoned recreational and are not used nor lanes cleared during the winter.

Throughout the 1960s, the ecological health of the area improved and in 1978 the Association co-ordinated the creation of Sunfish Holdings, Inc. to purchase environmentally sensitive lands surrounding Sunfish Lake to guarantee future protection.

In the 1980s, an intensive program of harvesting chara to remove an abundance of nutrients in the lake was undertaken, along with limiting the lake to counteract the effects of acid rain. Stewardship efforts continued in the 1990s and 2000s with efforts to control purple loosestrife, a new forest management program and considerable efforts to protect a broader area around the lake with the Laurel Creek Headwaters Environmentally Sensitive Landscape greenbelt initiative.

The association members have also been supportive of Ontario Nature's greenway initiative, and regularly share their experiences with engaging landowners and the broader community. The group owns and stewards 50 acres (200,000 m2) of woodland and wetland surrounding Sunfish Lake. They have undertaken tree planting projects, and have conducted a fish survey of Sunfish Lake.

All content from Kiddle encyclopedia articles (including the article images and facts) can be freely used under Attribution-ShareAlike license, unless stated otherwise. Cite this article:
Sunfish Lake (Ontario) Facts for Kids. Kiddle Encyclopedia.