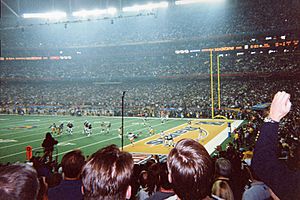 On the final play of Super Bowl XXXIV, Rams' linebacker Mike Jones applies The Tackle to Titans receiver Kevin Dyson, who fell one yard short of the goal line.

Super Bowl XXXIV (or Super Bowl 34) was a Super Bowl game between the St. Louis Rams and the Tennessee Titans in the National Football League (NFL) champion for the 1999 regular season. The Rams won against the Titans 23–16. The game was played on January 30, 2000 at the Georgia Dome in Atlanta, Georgia. It is best remembered for the final play of the game, where Mike Jones of St Louis tackled Kevin Dyson of Tennessee at the one yard line as time ran out, thus stopping Tennessee from scoring a touchdown that could have tied the game.

Both teams did not play well early on in the game. St. Louis went inside the "Red zone" (the final 20 yards) of Tennessee's half six times in the first half, but only scored four times - three field goals, and one touchdown. They missed one field goal try, and had to abort another due to a bad snap. Tennessee also missed a field goal in the fist half. This gave St Louis a 16-0 lead at half time. In the second half, Tennessee fought back, with two Touchdowns - but only scored the extra point on one of them, and then tied the game with a field goal. St. Louis then scored in just one play to take the lead again, 23-16, with fewer than two minutes left. With only one time-out remaining, Tennessee tried to drive into the End zone to score a touchdown that could have tied the game if they made the extra point. However, after using their time-out with just six seconds left, the final play had Kevin Dyson tackled at the one yard line. The time ran out, and St. Louis won the game.

All content from Kiddle encyclopedia articles (including the article images and facts) can be freely used under Attribution-ShareAlike license, unless stated otherwise. Cite this article:
Super Bowl XXXIV Facts for Kids. Kiddle Encyclopedia.