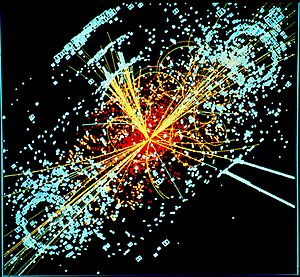 Supersymmetry is a scientific theory that says that when elementary particles (such as photons, electrons, and quarks) were formed at the beginning of the universe, matching kinds of theoretical "superparticles" were also created. If this theory is true, it would at least double the kinds of particles in the universe. If the universe has extra dimensions (M-Theory by Edward Witten predicts up to 11) then there would also be more ways to have symmetry and more kinds of superparticles.

Many scientists hope to prove supersymmetry because it fills many gaps in the Standard Model of physics (including dark matter) and would give support to the ideas of string theory. However, experiments in the Large Hadron Collider have not found evidence of supersymmetry so far.

Supersymmetry was the idea of Hironari Miyazawa (b. 1927).

All content from Kiddle encyclopedia articles (including the article images and facts) can be freely used under Attribution-ShareAlike license, unless stated otherwise. Cite this article:
Supersymmetry Facts for Kids. Kiddle Encyclopedia.