Surena or Suren, also known as Rustaham Suren (died 53 BC) was a Parthian spahbed ("general" or "commander") during the 1st century BC. He was the leader of the House of Suren and was best known for defeating the Romans in the Battle of Carrhae. Under his command Parthians decisively defeated a numerically superior Roman invasion force under the command of Marcus Licinius Crassus. It is commonly seen as one of the earliest and most important battles between the Roman and Parthian empires and one of the most crushing defeats in Roman history.

"Surena" remains popular as a name in Iran. "Surena" is the Greek and Latin form of Sûrên or Sūrēn. As "Suren", the name remains common in Armenia. Suren means "the heroic one, Avestan sūra (strong, exalted)." 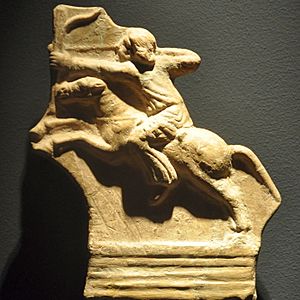 In Life of Crassus 21, written c. 125 years after the commander's time, Plutarch described Surena as "an extremely distinguished man. In wealth, birth, and in the honor paid to him, he ranked next after the king; in courage and ability he was the foremost Parthian of his time; and in stature and personal beauty he had no equal." Also according to Plutarch, there were "many slaves" in his army, suggesting the general had great wealth. However, the actual meaning of the term "slaves" (doûloi, servi) mentioned in this context is disputed. Plutarch also described him as "the tallest and finest looking man himself, but the delicacy of his looks and effeminacy of his dress did not promise so much manhood as he really was master of; for his face was painted, and his hair parted after the fashion of the Medes." Surena was thus one of the most powerful men in the Parthian Empire, and according to Gazerani, was a "king in his own right, as he travels with what is unmistakably a courtly retinue" In 54 BC, Surena commanded troops of Orodes II at the battle for the city of Seleucia. Surena distinguished himself in this battle for dynastic succession (Orodes II had previously been deposed by Mithridates IV) and was instrumental in the reinstatement of Orodes upon the Arsacid throne.

In 53 BC, the Romans advanced on the western Parthian vassalaries. In response, Orodes II sent his cavalry units under Surena to combat them. The two armies subsequently met at the Battle of Carrhae (at Harrân in present-day Turkey), where the superior equipment and clever tactics of the Parthians to lure the Romans out into the middle of the desert enabled them to defeat the numerically superior Romans. Although this feat of arms took a severe toll on the Roman troops (Plutarch speaks of 20,000 dead and 10,000 prisoners), and "produced a mighty echo amongst the peoples of the East," it did not cause "any decisive shift in the balance of power," that is, the Arsacid victory did not gain them territory. Surena was then executed by King Orodes II, the reason likely being that the king felt Surena could be a threat.

All content from Kiddle encyclopedia articles (including the article images and facts) can be freely used under Attribution-ShareAlike license, unless stated otherwise. Cite this article:
Surena Facts for Kids. Kiddle Encyclopedia.