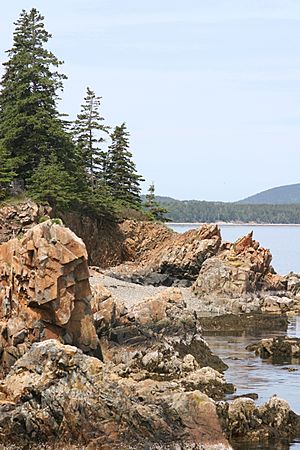 The rocky north coast of Sutton Island, ME. Eight foot tides are typical here. Mount Desert Island is visible in the Background.

Sutton Island, in Hancock County, Maine, is a small, private island south of Mount Desert Island, and north of Cranberry Isles, Maine. Its dimensions are roughly 2.1 km on its east–west axis by 1.1 km north to south.

From at least the 1950s until 2008, the island received mail service via a private ferry, which delivered mail to the island by leaving it "in a specially marked trash can on the dock for recipients to pick up." The U.S. Postal Service ended the practice in 2008 due to security concerns; residents of the island now must journey by boat to the Northeast Harbor post office, to retrieve their mail.

Population, transportation, and points of interest

The island's population is seasonal; it is currently inhabited by humans only in summertime, although in the past Sutton Island had year-round residents.

The poet Rachel Field maintained a summer home on the island.

The island has no roads, bridge to the mainland, nor airstrip. It is primarily accessed by mail boat from Northeast Harbor or by ferry or water taxi from Southwest Harbor, Maine.

There is a cemetery on Sutton Island.

Sutton Island has a "100-year-old osprey nest perched on an outcropping of rocks."

All content from Kiddle encyclopedia articles (including the article images and facts) can be freely used under Attribution-ShareAlike license, unless stated otherwise. Cite this article:
Sutton Island Facts for Kids. Kiddle Encyclopedia.