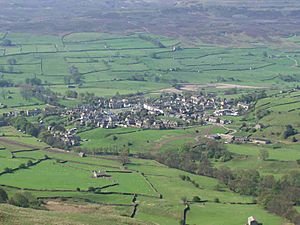 A view from Fremington Edge of the village of Reeth, where Swaledale Museum is located, and the surrounding area of Swaledale covered by the museum.

Swaledale Museum is a local museum in the village of Reeth, near Richmond in North Yorkshire, England. It covers rural history including life and work in the local area of Swaledale and Arkengarthdale within the Yorkshire Dales National Park.

In 1974, the building was bought from the Methodist Church and opened as a privately owned museum, the Swaledale Folk Museum. In 2004 there was a change of ownership, but the museum remains independently run with a team of volunteers.

There is a Friends of Swaledale Museum volunteer group, which helps in the running of the museum and its associated activities and groups.

Among the exhibits at the museum are some photographs of the former lead mine at Arn Gill, and the original engraved keystone from its entrance arch.

All content from Kiddle encyclopedia articles (including the article images and facts) can be freely used under Attribution-ShareAlike license, unless stated otherwise. Cite this article:
Swaledale Museum Facts for Kids. Kiddle Encyclopedia.