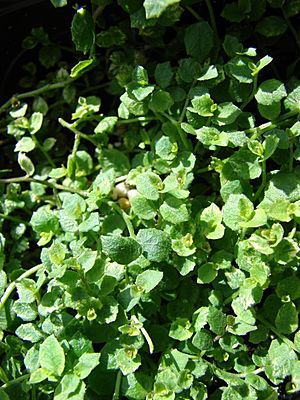 Isotoma fluviatilis, commonly known as swamp isotome or blue star creeper, is a small herbaceous perennial in the family Campanulaceae.

The prostrate perennial herb often forms a low growing mat. It is usually pubescent or sometimes glabrous and roots at nodes. The deep green leaves are 4 to 12 millimetres (0.16 to 0.47 in) in length and 2 to 8 mm (0.079 to 0.315 in) wide. The leave blade is oblong, elliptic or linear in shape or the lower ones ovate or obovate in shape.

It forms white solitary flowers that are axillary and can be bisexual or unisexual. Capsules form later that are obconical to obovoid in shape and slightly asymmetric. They are usually 3 to 6 mm (0.118 to 0.236 in) in length with a 3 mm (0.118 in) diameter.

The plant flowers during the summer months between November and March producing a carpet of white-blue five-petalled star-shaped flowers that are ideal as groundcovers in garden beds, rockeries or between paving stones.

The species was first formally described as Lobelia fluviatilis by the botanist Robert Brown in 1810 in the work Prodromus Florae Novae Hollandiae and later reclassified in the genus Isotoma by George Bentham in 1864 in Flora Australiensis. Several synonyms exist for this species including; Laurentia fluviatilis, Enchysia gaudichaudii and Rapuntium fluviatile.

There are three known subspecies:

The species is often found growing in areas of moist sand or in mud along the margins of creeks and streams and seepage areas. It is also found among granite outcrops and wet depressions. It is found in south eastern Australia from southern parts of South Australia extending through much of Victoria, through much of Tasmania, eastern New South Wales and south eastern Queensland.

All content from Kiddle encyclopedia articles (including the article images and facts) can be freely used under Attribution-ShareAlike license, unless stated otherwise. Cite this article:
Swamp isotome Facts for Kids. Kiddle Encyclopedia.