The other kind of Chestnut is commonly called Horse Chestnut. It is not related to this tree. 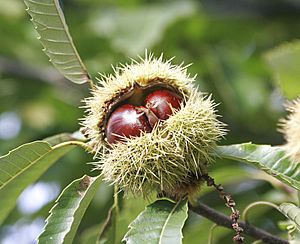 the fruit of the tree 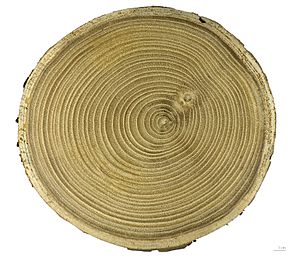 Sweet Chestnut, sometimes called European Chestnut, Spanish Chestnut or Portuguese Chestnut is a family of trees. Originally these trees were native to the Mediterranean parts of Europe and Asia Minor. These trees can grow to sizes between 20 and 35m high. The trees are deciduous, they do not have leaves in winter.

The species is widely cultivated for its edible seeds (also called nuts) and for its wood.

A tree grown from seed may take 20 years or more before it bears fruits, but a grafted cultivar such as 'Marron de Lyon' or 'Paragon' may start production within five years of being planted. Both cultivars bear fruits with a single large kernel, rather than the usual two to four smaller kernels.

All content from Kiddle encyclopedia articles (including the article images and facts) can be freely used under Attribution-ShareAlike license, unless stated otherwise. Cite this article:
Sweet Chestnut Facts for Kids. Kiddle Encyclopedia.