30 St Mary Axe is a skyscraper in London's financial district, the City of London. It was formerly named the Swiss Re Building, after Swiss Reinsurance Company. The tower is also known as "The Gherkin". The building was finished in December 2003. It was opened at the end of May 2004. Swiss Re Tower has 41 floors. The tower is 180 metres (591 ft) tall. It is on the site of the former Baltic Exchange, which was badly damaged in 1992 by the explosion of a bomb by the Provisional IRA.

The building has become an iconic symbol of London. It is one of the city's most well known examples of modern architecture. 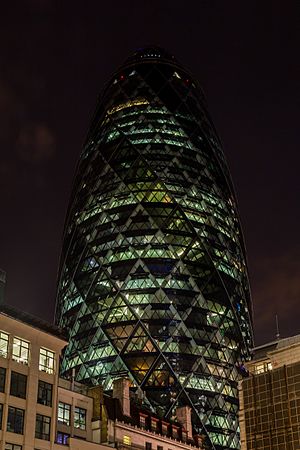 All content from Kiddle encyclopedia articles (including the article images and facts) can be freely used under Attribution-ShareAlike license, unless stated otherwise. Cite this article:
30 St Mary Axe Facts for Kids. Kiddle Encyclopedia.