The Sydney Cove Railings are heritage-listed railings located at the Circular Quay Concourse, Circular Quay East and West, in the inner city Sydney suburbs of Dawes Point, The Rocks and the Sydney central business district, in the City of Sydney local government area of New South Wales, Australia. It was built from 1900. It is also known as Part of Sydney Cove. The property is owned by Property NSW, an agency of the Government of New South Wales. It was added to the New South Wales State Heritage Register on 10 May 2002.

The railings and sandstone gate posts are relics of the main steamer wharf and previous schemes of improvement to Circular Quay. They are some of the last remaining from the 19th century.

The railings were introduced as part of various schemes for urban improvements in the late 19th and early 20th century, by the Sydney Harbour Trust at the turn of the century, by the Maritime Services Board at the time of refurbishment of the ferry wharves and building of the Cahill Expressway in the 1950s-60s, and for the 1988 Bicentennial. 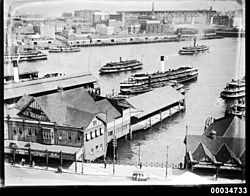 Much of the sea wall at Sydney Cove is edged by cast iron fencing comprising vertical posts of two alternating patterns joined by horizontal railings at top and bottom with diagonal bracing and a central medallion at the cross point between. This fencing continues from around Dawes Point to the north boundary of the Park Hyatt Hotel, and continues, interrupted by the decking in front of the Park Hyatt Hotel, the fencing and gates to Campbell's Wharf and then the open area in front of Campbell's Stores and by the Overseas Passenger Terminal. It continues again past the palisade gates, fencing and gateposts to the south of the Terminal, along Circular Quay West to the main concourse giving access to the ferry wharves, and resumes at Circular Quay East, terminating at the Portobello Cafe.

The posts are of cast iron while the rails are in steel. The fencing was reproduced and extended for the improvements undertaken in the 1988 Bicentennial. In addition, when they were damaged they were replaced over the years.

It is noted that the same railing pattern has been used in the fencing at Pyrmont Point Park, completed in 1997. The Circular Quay Concourse has a different style of fencing with smaller posts and vertical railings enclosed by horizontal railings at the top and bottom, with the top two horizontal rails decorated by a sea horse set in a circle motif. It is noted that sea horses form part of the ironwork decorative scheme of the railway station at Circular Quay. These railings continue along the concourse and return for 2–3 metres (6 ft 7 in–9 ft 10 in) at the access to each ferry wharf.

Since c. 1900: Constant replacement of damaged sections of railings.

Further research should be undertaken regarding the dates of introduction of the two types of fencing, and of the location of the original sections of fence.

Sydney Cove railings was listed on the New South Wales State Heritage Register on 10 May 2002 having satisfied the following criteria.

The railings are aesthetically significant as prominent and attractive urban features of the Cove.

All content from Kiddle encyclopedia articles (including the article images and facts) can be freely used under Attribution-ShareAlike license, unless stated otherwise. Cite this article:
Sydney Cove railings Facts for Kids. Kiddle Encyclopedia.