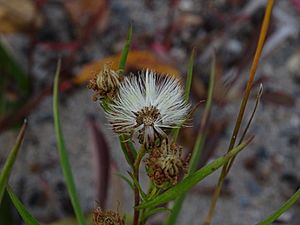 S. robynsianum is a perennial, herbaceous species with long rhizomes and erect stems 10-80 cm high. The stiff narrow leaves are slightly toothed or entire. Flowers may be produced from August to September. The flower heads are located singly or in groups of up to three on leafy branches. The ray florets are dark blue-violet and the disc florets are yellow.

This species has often gone by the name Aster longifolius, but the type specimen for that name is a specimen of Symphyotrichum novi-belgii, and as such that name cannot be used for the plants now called S. robynsianum. In 1957, Jacques Rousseau, a Quebecois ethnobotanist, described Aster robynsianum based on a specimen from central Quebec, naming it after Walter Robyns, a director of the National Botanic Garden of Belgium. The name Symphyotrichum robynsianum was first used in 1997 by Luc Brouillet and Jacques Labrecque.

Symphyotrichum robynsianum may have originated as hybrid between two other aster species, but its origin is not well understood.

Symphyotrichum robynsianum is native to Manitoba, Ontario, Quebec, Michigan, Minnesota and Wisconsin. It is typical of moist, open, sandy, gravelly or rocky habitats such as river and lake shores and alvars. It is usually associated with calcareous habitats.

All content from Kiddle encyclopedia articles (including the article images and facts) can be freely used under Attribution-ShareAlike license, unless stated otherwise. Cite this article:
Symphyotrichum robynsianum Facts for Kids. Kiddle Encyclopedia.