Tallulah Gorge State Park is a 2,689-acre (1,088 ha) Georgia state park adjacent to Tallulah Falls, Georgia, along the county line between Rabun and Habersham Counties. The park surrounds Tallulah Gorge, a 1,000-foot (300 m) deep gorge formed by the action of the Tallulah River, which runs along the floor of the gorge. The major attractions of the gorge are the six waterfalls known as the Tallulah Falls, which cause the river to drop 500 feet over one mile (150 m over 1.6 km).

Although Tallulah Gorge State Park was not established until 1993 under Georgia governor Zell Miller as a result of cooperation with Georgia Power, there were discussions as early as 1905 regarding the establishment of a park at Tallulah Gorge. Tourism intensified in 1882 with the completion of a railroad later called the Tallulah Falls Railroad which brought thousands of people a week to the area. Additionally, when Georgia Power began building a series of hydroelectric dams along the original course of the Tallulah River, efforts to establish a park intensified. Helen Dortch Longstreet, widow of Confederate General James Longstreet, led an unsuccessful campaign in 1911 to have Tallulah Gorge protected by the state.

Tallulah Gorge is bounded upstream by a hydroelectric dam operated by Georgia Power. Normally, the river flows much lower than the historical flow. Large releases of water are typically scheduled for kayaking and whitewater rafting on the first two weekends of April and the first three weekends of November. Additional aesthetic water releases are scheduled for weekends in the spring and fall to allow visitors to see what the natural flow of the river would look like in the gorge. 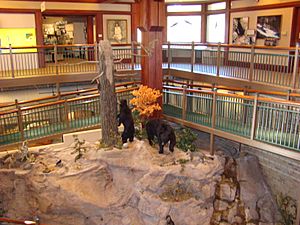 All content from Kiddle encyclopedia articles (including the article images and facts) can be freely used under Attribution-ShareAlike license, unless stated otherwise. Cite this article:
Tallulah Gorge State Park Facts for Kids. Kiddle Encyclopedia.