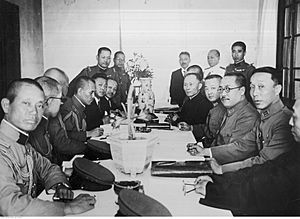 The Tanggu Truce, sometimes called the Tangku Truce (Chinese: 塘沽协定; 塘沽協定; Tánggū Xiédìng; Tanku kyōtei (塘沽協定code: ja is deprecated )) was a ceasefire signed between China and Empire of Japan in Tanggu District, Tianjin on May 31, 1933, formally ending the Japanese invasion of Manchuria which had begun two years earlier.

After the Mukden Incident of September 18, 1931, the Japanese Kwantung Army invaded Manchuria, and by February 1932 had captured the entire region. The last emperor of the Qing Dynasty, Puyi, who was living in exile in Tianjin was invited by the Japanese to accept the throne of the new Empire of Manchukuo, which was controlled by the Japanese army. In January 1933, to guard Manchukuo’s southern borders, a joint Japanese and Manchukuo force invaded Rehe, and after conquering that province by March, drove the remaining Chinese armies in the northeast outside the Great Wall into Hebei Province.

The Western powers blamed Japan's actions but did little else. When the League of Nations demanded that Japan stop fighting, the Japan withdrew from the League on March 27, 1933.

As the Japanese army was under clear orders from Emperor Hirohito (who wanted a quick end to the fight with China) not to go into the Great Wall, the Japanese halted their attack in May 1933.

On May 22, 1933, Chinese and Japanese representatives met to talk the end of the fight. The Japanese demands were serious: a demilitarized zone covering one hundred kilometers south of the Great Wall, from Beijing to Tianjin was to be set up, with the Great Wall itself under Japanese control. No regular Kuomintang military units were to be allowed in the zone, although the Japanese were allowed to use scout aircraft or ground patrols to check that the agreement was maintained. Public order within the zone was to be maintained by a police unit Demilitarized Zone Peace Preservation Corps. Furthermore, they forced China to recognise Manchukuo as a legitimate government.

Two secret clauses left out any of the Anti-Japanese Volunteer Armies from this Peace Preservation Corps and provided for any problems that could not be fixed by the Peace Preservation Corps to be arranged by agreement between the Japanese and Chinese governments. Having lost every major battles and much territory, and with the Chinese government under Chiang Kai-shek more concerned with fighting the Chinese Communist Party than the Japanese, the Chinese government agreed to all demands. Furthermore, the new demilitarized zone was mostly within the remaining territory of the Manchurian warlord Zhang Xueliang.

The Tanggu Truce resulted in the de facto recognition of Manchukuo by the Kuomingtang government, and acceptance of the loss of Rehe. It brought a short end to the combat between China and Japan and for a brief period, relations between the two countries improved. On May 17, 1935, the Japanese legation in China was improved to the status of embassy, and on June 10, 1935, the He-Umezu Agreement was concluded. The Tanggu Truce gave Chiang kai Shek time to merge his forces and to focus his efforts against the Chinese Communist Party, though at the cost of northern China. However, Chinese public opinion was opposing to truce so favorable to Japan and so shameful to China. Although the Truce set up a demilitarized buffer zone, Japanese territorial desires towards China remained, and the Truce proved to be only a short break until fightings broke out again with the start of the Second Sino-Japanese War in 1937.

All content from Kiddle encyclopedia articles (including the article images and facts) can be freely used under Attribution-ShareAlike license, unless stated otherwise. Cite this article:
Tanggu Truce Facts for Kids. Kiddle Encyclopedia.