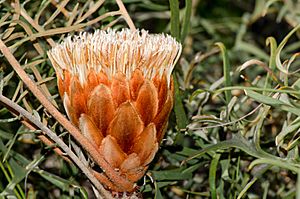 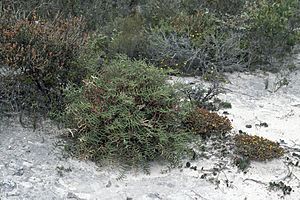 Banksia pteridifolia, commonly known as tangled honeypot, is a species of shrub that is endemic to the southwest of Western Australia. It has short, underground stems, deeply pinnatipartite leaves with sharply-pointed, linear lobes on the sides, creamy white or yellow flowers in heads of about one hundred and later up to five follicles in each head.

Scottish botanist Robert Brown described the tangled honeypot as Dryandra pteridifolia in 1810, after collecting it in January 1802 from Lucky Bay on Western Australia's south coast. The description was published in Transactions of the Linnean Society of London.

In 2007 Austin Mast and Kevin Thiele transferred all dryandras to the genus Banksia and renamed this species Banksia pteridifolia and the subspecies pteridifolia, vernalis and inretita respectively. The names of the subspecies are accepted by the Australian Plant Census.

All three subspecies of B. pteridifolia grow in kwongan. Subspecies inretita occurs between Lake Grace and Lake King. Subspecies pteridifolia is found between the Gairdner River, Cape Le Grand National Park and Newdegate and subsp. vernalis between Eneabba, the Moore River and Perth.

Subspecies pteridifolia is listed as "not threatened" by the Western Australian Government Department of Parks and Wildlife but subsp. inretita is listed as "Priority Two" meaning that it is poorly known and from only one or a few locations and subsp. vernalis as "Priority Three" meaning that it is poorly known and known from only a few locations but is not under imminent threat.

All content from Kiddle encyclopedia articles (including the article images and facts) can be freely used under Attribution-ShareAlike license, unless stated otherwise. Cite this article:
Tangled honeypot Facts for Kids. Kiddle Encyclopedia.