The Tasmanian Symphony Orchestra (TSO) is a symphony orchestra based in Hobart, Tasmania, Australia. It is the smallest of the six orchestras established by the Australian Broadcasting Corporation (ABC).

The Tasmanian Symphony Orchestra was established in 1948, and gave its first concert on 25 May in the Hobart Town Hall, under the baton of Joseph Post. The soloist was the Tasmanian-born pianist Eileen Joyce, who performed the Piano Concerto in A minor by Edvard Grieg.

From 1973 to 1998 its home was the ABC Odeon, a renovated former cinema built in 1916 as a replica of New York's Strand Theater. It has now moved to the Federation Concert Hall. In 1998, a 50th anniversary concert was held in the original venue, the Town Hall, under its then chief conductor David Porcelijn.

The TSO was the first Australian orchestra to have its own radio program, "Journey into Melody", which was broadcast weekly from 1956 to 1969.

By the late 1960s, there were far more subscribers per head of the state population (1 in 144) than in any of the other capital-city based ABC orchestras. In 1995, when funding cuts threatened to downsize the orchestra from 47 players, a petition was launched by the Friends of the TSO that gathered 35,000 signatures, the largest petition in Tasmanian history. 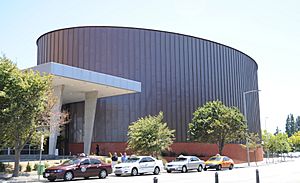 In 1998, A Taste of the Tasmanian Symphony Orchestra was published. This was a cookbook that included recipes contributed by members of the orchestra, guest conductors and visiting artists. It sold far more than anticipated, including healthy sales on the Australian mainland.

It receives government funding from both the Tasmanian and Australian governments. The Orchestra performs at a number of concert venues both in Tasmania and interstate, including Federation Concert Hall, Tolosa Park in Glenorchy, Princess Theatre and Albert Hall both in Launceston, Burnie Town Hall, Devonport Entertainment Centre, Wrest Point Entertainment Centre in Sandy Bay and the City Recital Hall in Sydney. Major sponsors of the Orchestra include Hydro Tasmania, Bass and Equitable Building Society and the Hobart City Council.

Amongst the orchestra's recordings are the complete works of Ignaz Moscheles for piano and orchestra, for which the soloist and conductor was Howard Shelley.

The TSO has toured to Israel, Greece, South Korea and Indonesia, Argentina, United States, Canada, China and Japan as well as widely throughout Australia. It won the 1996 Sidney Myer Performing Arts Award, and a documentary on Maurice Ravel's Mother Goose, which featured the TSO, won the Best Biography Profile at the New York Festival International Television Programming Awards.

With Trisha Crowe, Michael Falzon (We Will Rock You), Amanda Harrison (Wicked); Lucy Maunder (Dr Zhivago), Andy Conaghan (Oklahoma!), Jacqui Dark and Toni Lamond, the TSO recorded I Dreamed A Dream: The Hit Songs Of Broadway for ABC Classics, which was released on 21 June 2013. Falzon and Crowe joined TSO and conductor Guy Noble for TSO goes to Broadway on 20 (Hobart) and 22 (Launceston) June 2013. to coincide with the launch of the album.

All content from Kiddle encyclopedia articles (including the article images and facts) can be freely used under Attribution-ShareAlike license, unless stated otherwise. Cite this article:
Tasmanian Symphony Orchestra Facts for Kids. Kiddle Encyclopedia.