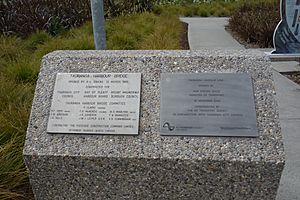 Plaques at the Tauranga Harbour Bridge

The original bridge was opened on 13 March 1988 by former Mayor of Tauranga, Robert Arthur Owens. Prior to the opening of the bridge, traffic wishing to travel between Tauranga and Mount Maunganui had to use the Hairini and Maungatapu bridges. The Tauranga Harbour Bridge was tolled from opening until 22 July 2001. The tollbooths were on the Mount Maunganui side of the bridge. As the population of Tauranga grew, the bridge began to get very congested during the peak hours.

All content from Kiddle encyclopedia articles (including the article images and facts) can be freely used under Attribution-ShareAlike license, unless stated otherwise. Cite this article:
Tauranga Harbour Bridge Facts for Kids. Kiddle Encyclopedia.