TheTawachiche River flows from north to south, on a distance of 25 km, entirely in the territory of the Municipality of Lac-aux-Sables, in Mékinac Regional County Municipality, in Mauricie, in the province of Quebec, Canada. 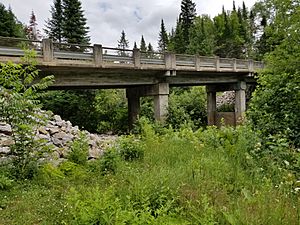 The Tawachiche River watershed covers 196 km² and is the ninth largest sub-watershed in the Batiscanie.

River Tawachiche pass through a single village, Hervey-Jonction, then crosses Rang Saint-Charles and empties into the Batiscan River (which forms a sharp bend at this point), at the limit Sainte-Thècle and Lac-aux-Sables. Its main tributary, the Tawachiche West River, flows into Tawachiche river at about 13 km from its mouth (in Audy sector, at the boundary of Zec Tawachiche).

The "Lac à l'Orignal" (Moose Lake) (elevation: 379 m) is the upper lake of the Tawachiche River in the Marmier (township). This lake is fed from the north by a creek which starts at an unnamed lake (elevation: 420 m; heart shaped); this stream descends westward to "lac Petit" (Lake Petit) (elevation: 377 m; 140 m long and surrounded by marshes); then the stream branches off to the south and crosses four small lakes before flowing into marsh area on the shore north of "lac à l'Orignal" (Moose Lake).

Down, the river quenches including lake "du Milieu" (Middle lake), Boiteau and Buffon. The Tawachiche river is also fed by the outlet of Fontaine lake.

While the Tawachiche West River is fed by lakes Masketsi, Little Masketsi and Roberge, located in the non organized territory of the Lac-Masketsi.

All the headwaters of the river is located in the Tawachiche Zec Tawachiche which is the main watershed. Lake Masketsi (4.0 square kilometres (1.5 sq mi)) is the largest lake in this sub-watershed (river Tawachiche) of the Regional Development Plan and Integrated Resource (PRDIRT).

On nearly all the way, this river flows in forested areas. Although the river flows through agricultural areas, from about a mile above the village of Hervey-Jonction to its mouth, each bank maintains a wooded strip, of a width generally ranging from 50 to 100 meters.

Northeast of the village of Hervey-Jonction, after passing under the bridge of the Route 153, the river flows through a beautiful waterfall cascades which inflates in March and April due to snowmelt. The surface of the Tawachiche river is usually frozen from November to April, allowing the construction of roads ice for transport to the lumber camps before the construction of a motorable road on the side of the river. This ice road was used greatly during the Indian prehistory and pioneers in the settlement.

Several cottages are built surrounding the Tawachiche river, including several in the Audy (which has several small streets), the area of the falls in the village of Hervey-Jonction, and in the area between the village of Hervey-Jonction and the mouth of the river. Audy sector offers various services to visitors including a relay, lodging, rental cabins, camping, the docking station of the Zec Tawachiche, etc.

The main bridges over the Tawachiche river, from the mouth are:

• A bridge linking the St-Thomas North road (Sainte-Thècle) and Saint-Alphonse road (Lac-aux-Sables), is located at 0.5 km upstream of the mouth of Tawachiche river. This bridge is close to a second bridge (located a few hundred metres southeast of the first). This second bridge spans a small river which becomes a tributary of the right bank of Tawachiche few hundred meters below. The road from St Georges Road (Lac-aux-Sables) ends between the two bridges. This area is designated Pee-Wee.

• Road Bridge on Route 153 (chemin Saint-Charles), located at the northern end of the village of Hervey-Jonction (near golf course) or 5.5 km by water from the mouth (or 4 km in a direct line, because the sinuosity of the river Tawachiche). This bridge is located upstream of a large drop, which is located near the site of the second station-Hervey-Jonction. The new railway station is now located in front of the chapelle of the village.

• Bridge Railway of the Canadian National (formerly Grand Trunk Railway), on the railway line between Hervey-Jonction-and Lac Saint-Jean. The iron bridge is located 0.4 km upstream of the bridge on Route 153.

• Pedestrian Bridge in the second sawmill Veillette & Frères Ltée, built 500 meters north of the village of Hervey-Jonction, upstream of the railway bridge. This mill was built in the fall of 1933 and was operated until 1941. It was demolished in 1946.

• First road bridge Tawachiche the way, leading to the docking station (sector Audy) of Zec Tawachiche. This bridge is located 1.8 km from the intersection of "Lac en coeur" road. After the bridge, the road up the river on the left bank.

• Second Tawachiche Road flyover, located 5.9 km from the intersection of "Route du lac en coeur", leading to the docking station (sector Audy) of Zec Tawachiche. After the bridge, the road up the river on the right bank.

The first dams built at the mouth of Lake watershed rivers Tawachiche, Tawachiche Tawachiche West and East, served from 1933 to regularize the flow (especially during floods) and the water level in order to promote timber transport by flotation. Since the 1950s, dams lakes at the mouth promote water activities. Major dams in this sub-basin are:

A saw mill, owned by the forester contractor Théotime Massicotte, living in Sainte-Thècle, was built between the railway and the river Tawachiche, less than a mile south of the small Audy railway station. The saw mill was approximately eight kilometers north of the village of Hervey-Jonction. This mill was sold to Frank Blais, forest contractor and merchant living in Sainte-Thècle, who had operated a store in the early 20th century at the village the station (Notre-Dame street), Sainte-Thècle, Quebec. In 1922, Frank Blais sells this small sawmill in Audy, powered by steam, to the company "Veillet & Frères Ltée" (Veillet & Brothers Ltd). The company made minor additions to this mill.

Founded in 1920 by four brothers Jeffrey, Freddy, Alphée and Wilson Veillet of Sainte-Thècle, Veillette & Brothers company Limited acquires rights of cutting hardwood, in 1922, in the north of Hervey-Jonction, in the area of Tawachiche river, around Audy, along the rail road leading to La Tuque.

This mill was operated about 16 years until about 1934. From the beginning, the mill assured employment to 22 or 25 men assigned to sawing wood, the drave, the stacking and transportation, and also a hundred woodcutters in the forest. Contracts cutting wood in the forest were usually granted to designated contractors including: Wellie Charest, Armand Plamondon, Josaphat Veillet and Bruno Veillet.

Depending on demand, the wood was sawn into planks, boards, wooden construction, railway sleepers, or boards (1.25 inch to 2.5 inch) for the textile manufacturers which were transformed into spindles.

The combustion chamber of the steam engine boiler was powered by mill sawdust. In the courtyard, the boards were stacked in individual cages up to a height of six meters, thus using all the free space of the courtyard around the mill. This Audy mill ceased its activities in 1934, to be replaced by the new mill built by Veillet in autumn 1933, at around 500 meters north of the village of Hervey-Jonction and operational in spring 1934.

The second sawmill of "Veillette & Frères Ltée" was built in the Fall of 1933, on the right banks of the river Tawachiche, at 500 meters North of the village of Hervey-Jonction. The mill went into operation in the Spring of 1934, concurrently with the closing of the sawmill in Audy. In Fall 1933, the company Veillette & Frères Ltée has built dams on various water bodies and lakes in Tawachiche area, including Terrien lake and Masketsi lake in order to control the flow and water level on the river Tawachiche, and Tawachiche West for the transportation of the logs by flotation.

A dam was built on the river next to the sawmill Tawachiche (near Hervey-Jonction), in order to retain water and facilitate the floating of logs to the landing installed at the top of the dam. At the beginning of this sawmill, the company used 12 feet logs, to be cut by the sawmill in "pitoune" of four feet long each. Then a slab brought the pitounes 75 feet higher to the docks of railway wagons (parked on side line). Three railroad cars could be loaded at the same time, by man's muscle and wielding hooks. Finally, with the democratization of mechanical chain saws, used manually in the forest by worker, it was easier to cut each log in four feet in length, directly on cutting site, before transportation by truck.

The sawmill ceased its operations in 1941, as the wood was then transported by truck directly from seater cutting to paper mill in Grand-Mère or Shawinigan. This sawmill was demolished in 1946.

All content from Kiddle encyclopedia articles (including the article images and facts) can be freely used under Attribution-ShareAlike license, unless stated otherwise. Cite this article:
Tawachiche River Facts for Kids. Kiddle Encyclopedia.