The Batiscan River is located in La Mauricie administrative region, in the Quebec province, Canada. This river flows 196 km from Lake Édouard in Mauricie south and west to empty into the St. Lawrence River at Batiscan, Quebec, northeast of Trois-Rivières, Quebec. It passes through the regional county municipalities (RCM) (MRC in French) of La Tuque, Portneuf, Mékinac and Les Chenaux.

The river traverses a territory covered mainly by forest from its source to the Saint-Adelphe, Quebec railway bridge; the rest of its course is predominantly agricultural. The Batiscan river valley is designated "Batiscanie, Quebec". Today, this valley is a paradise for camping, vacationing, observations of nature and water activities such as canoeing, kayaking, rafting, pontoon and swimming in designated areas. The Batiscan River is a popular Canadian whitewater kayaking destination, providing numerous class III, IV, and V rapids.

The river was named in 1602 by Samuel de Champlain. He reported in 1610 that it was named for an Algonquin chief of the same name; however, this name was in use by Amerindian natives before the arrival of the first French explorers. The name "Batiscan" has been interpreted differently by various sources. Father Charles Arnaud argued that the name meant "steam cloud or light", or possibly "spray of dried meat". According to Pierre-Georges Roy the name means "who rushes to his mouth", which has been observed in the past. According to Father Albert Lacombe the name came from the Atikamekw term meaning "hoof or pending"; according to Father Joseph-Étienne Guinard, it derived from the cry "patiskam", meaning "stumble".

The Batiscan River begins its course at 363 m of altitude in the Laurentian Mountains, in Lake Édouard, which is located in the Municipality of Lake Édouard (Haute-Mauricie). Lake Édouard is also the source of the Jeannotte River, which joins the Batiscan river after a course of 48 km.

Starting from Lake Édouard, the Batiscan River flows 9.3 kilometres (5.8 mi) before flowing successively through three lakes in the centre of which is the "Lake of the cross (Lac-Édouard)". The river courses about 2.1 kilometres (1.3 mi) across the lakes. Then the river flows another unit 0.9 kilometres (0.56 mi) before passing through another lake, which also receives the discharge from the north of the sub-watershed Cookies lake. This northern sub-basin is considered as the second head of the river. 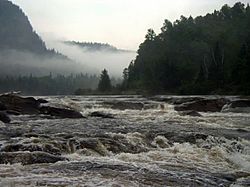 The Seigneurie du Triton, built in 1897 on the edge of Lake of the cross (Lac-Édouard), administers a hunting and fishing on 42.8 km² space. This outfitter is one of the oldest clubs in private hunting and fishing in Quebec. This outfitter offers several activities interpretive trails of nature walks and canoe rabaskaw, visits of beaver habitat and spawning (breeding trout), visit the Triton station, pedal boating, swimming, etc.. In this area, several hiking trails are maintained by the Society of Wildlife and Parks of Quebec, including linking the Cookies lake.

In the first segment 25 kilometres (16 mi) of its course, the Batiscan river flows through eight lakes (several being made by the swelling of the river) including two smallest.

Batiscan Lake is the second head of the Batiscan river. This elongated lake which is located in the MRC de La Jacques-Cartier (the unorganized territory of Lac-Croche). Batiscan lake is especially fed by Croche River, lies outside the southwestern boundary of the Laurentian Wildlife Reserve. This lake discharges into the "Rivière aux éclairs" (Lightning River), which runs westward for 15 km before flowing into the Batiscan river.

The river runs through a mostly forested area from its source to the bridge over railway Saint-Adelphe (with the exception of some agricultural areas close ranks St-Alphonse and Price Lac-aux-Sables), and in the vicinity of Rousseau Road north of town Notre-Dame-de-Montauban and Main Street (south of the same village.) The rest of the course of the river Batiscan is predominantly agricultural (with the exception of the area between the fall and fall of Jimmy Fireplace (in Sainte-Geneviève-de-Batiscan).

The main waterfalls (or rapids) of the Batiscan river are (starting from the head of the river):

Note: Upper Batiscanie begins at the mouth of the "Rivière-à-Pierre" that empties into the Batiscan River, at kilometre 88.5.

Note: Mid Batiscanie lies between Murphy Falls (Saint-Stanislas) and the mouth of the rivière-à-Pierre at km 88.5.

The river has some rapids or falls between Notre-Dame-de-Montauban and Saint-Adelphe. The Fall of the two and Fall of manitou are located in the latter locality.

The Batiscan river Falls are numbered from 1 to 10, from Saint-Narcisse going back to Notre-Dame-de-Montauban. 4–7 drops are less crowded because less accessible, being located in wilderness areas.

Note: Lower Batiscanie lies between the mouth of the Batiscan River and the foot of the Falls to Murphy (Saint-Stanislas (Des Chenaux))

The "Jesuit Journal" of April 20, 1657 reports from a trip fur trade on the river Batiscan, from April 20 to July 15, 1657, carried out by eight French from Trois-Rivières, with twenty canoes Algonquins. Starting from Trois-Rivières, the group passed 28 jumps on Batiscan river in 14 days, arriving at the end of their journey as of May 28, 1657. In total, the group crossed 74 jumps or portage. A French was then drowned.

The 1663 Charlevoix earthquake would have changed significantly the relief in the Batiscanie including the disappearance of jumps in the Batiscan River, the emergence of new rocks, flattening of some mountains, major cracks in the ground ....

The watershed of the Batiscan has an area of 4690 km². Its flow, which is measured at the central Saint-Narcisse is 96 m3/s. Flow has however a strong seasonal variation, with a maximum of 937 m3/s in May and a minimum of unity 7.9 m3/s in September. The last 18 km unit, Batiscan river empties of the St. Lawrence River. At the mouth of the river, tides are up to 1.5 m.

The basin is composed of a hundred rivers. The main rivers which are tributaries of the Batiscan, from upstream to downstream, are the river Castor noir, Lightning river, Jeannotte, Miguick, Rivière-à-Pierre, Tawachiche and Rivière-des-Envies.

In 1639, the Jesuits made the acquisition of lordship of Batiscan in order to evangelize the Attikameks. They do not settled in the colony, although they used the river up to the nineteenth century for the fur trade. In 1685, the Jesuits conceded the first batches of the Lordship, to the settlers established mainly in Sainte-Geneviève-de-Batiscan. In 1781, they installed a flour mill on Rivière des Envies, tributaries deemed easier than Batiscan river. In 1786, a chapel was built in Saint-Stanislas (Des Chenaux). Toward the end of nineteenth century, the municipalities were founded: Saint-Séverin, Saint-Tite, Sainte-Thècle, Saint-Adelphe and Lac-aux-Sables.

From 1852 the William Price and Company began to exploit the forest. Several sawmills were built on the Batiscan river and "Rivière des Envies". The timber was transported by water flow, requiring that workers had to drave the logs. The first trees were cut the White Pine sent to Great Britain. From the 1930, activities of logging turned and served rather to papers mills. In 1963 the log drive was abandoned on the Batiscan.

In 1896, Jean-Baptiste Frégault bought the North Shore Power Company and buy production rights on the Great Waterfall near Saint-Narcisse. There he built a hydroelectric plant and a high-voltage line of 29 km, the first of the British Empire. The plant was expanded in 1905. In 1907, it was sold to the Shawinigan Water and Power Company. The latter was replaced by a new central Saint-Narcisse in 1926. In 1963, it was acquired by Hydro-Quebec during the nationalization of electricity. This central Saint-Narcisse has a capacity of 15 MW. The Saint-Narcisse dam is the largest one with a length of 254 meters and a height of 21 meters from the river bed. Its reservoir covers 43 hectares.

Iron deposits were exploited from eighteenth century until the early twentieth century. Two forges were opened in the watershed, the "Forges de Batiscan", between 1798 and 1813, and "Forges de Saint-Tite", between 1870 and 1888. A zinc and lead was exploited in Notre-Dame-de-Montauban in 1911 and 1965. A copper and nickel was exploited to Lake Édouard in 1973 and 1974.

Major bridges built over the Batiscan river (from the mouth):

Note: In summary, 19 road bridges (or other infrastructure) and seven railway bridges span the river Batiscan throughout its course.

The central Saint-Narcisse is the only hydroelectric power plant ever built on the Batiscan river. However, two power plants have been built on the tributaries of the river Batiscan:

The Waterfall of the Nine (popularly designated "Waterfall of the five dollars bill") is located approximately 0.5 km upstream of the village of Notre-Dame-de-Montauban. Scenic view is beautiful from the waterfront park (referred Park of the Waterfall) or from the bridge over the Batiscan at the level of the village, or "Bar of the Waterfall" (east side of the river). This waterfall has a great resemblance to the image on the old five Canadian dollars bill. Public park built around the falls attracts many visitors. Eight trails were built around the Park of the Waterfall, by the local Cooperative Montauban, one joined the Otis Mountain (325 m.). In addition, an elevated walkway leads visitors on a small island in the middle of the rapids. This park around the falls began to be built in 1977, for the centenary of the parish of Notre-Dame-des-Anges.

Covering an area of 400 hectares (1000 acres), the regional Batiscan River Park is dotted with waterfalls, rapids and pools in the grip of Saint-Narcisse dam. The park which is bisected by the River Batiscan, has a long elevated walkway crossing the river, many lookouts and a network of trails totaling 25 kilometres, connecting three municipalities: Saint-Stanislas (Des Chenaux), Saint-Narcisse and Sainte-Geneviève-de-Batiscan. This park offers a range of educational activities on the environment, outdoor activities and historical thematics.

All content from Kiddle encyclopedia articles (including the article images and facts) can be freely used under Attribution-ShareAlike license, unless stated otherwise. Cite this article:
Batiscan River Facts for Kids. Kiddle Encyclopedia.