It was about 800 m (2,600 ft) from the town centre. Sir George Grey claimed that was due to opposition from local residents, though another source described them as, "interested landed proprietors".

The 1902 edition of The Cyclopedia of New Zealand described the station as, "of wood and iron, and contains a public vestibule and waiting room, ladies' waiting room, and general office. It has also a long passenger platform and a convenient goods shed. The stationmaster is assisted by a junior porter and a guard, and two gangers are resident in Te Awamutu."

The station buildings were demolished in 2001 and replaced by a shelter until the station closed in 2005. New Zealand Dairy Board (now Fonterra) rebuilt its freight connection about 2000. 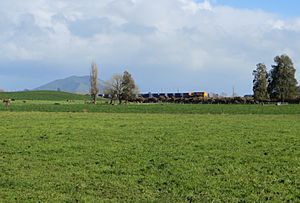 Since 2005 there has been a large flow from the dairy factory to Crawford St depot in Hamilton.

There are still hopes that passenger services may resume. For example, in 2015, Waipa District Council said, "it is important to preserve the rail platform facilities and infrastructure in Te Awamutu to enable future passenger rail connections between Te Awamutu and Hamilton".

As shown in the table and graph below, passenger numbers peaked in 1921 and again in 1944 - 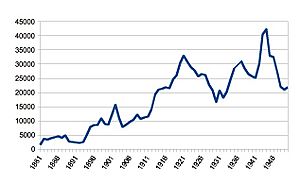 All content from Kiddle encyclopedia articles (including the article images and facts) can be freely used under Attribution-ShareAlike license, unless stated otherwise. Cite this article:
Te Awamutu railway station Facts for Kids. Kiddle Encyclopedia.