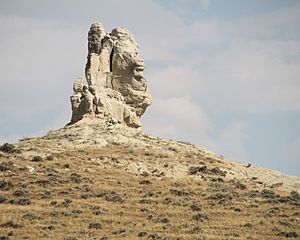 Teapot Dome was a political scandal that took place in 1921 to 1922 . The name comes from an oil reserve near Teapot Rock, Wyoming. President Warren G. Harding let the reserve and another reserve in California, be under the control of the Department of the Interior. The Secretary of the Interior, Albert Fall, who had taken $100,000 from oil companies, then let oil companies use the land. The United States Senate looked into the matter and found Fall had committed conspiracy. It is thought to be one of the biggest political scandals in American history. The scandal caused a large amount of damage to the legacy of former President Harding.

In 1924, Democrats tried to use Teapot Dome to their advantage in that year´s presidential election by reminding people about it. The tactic failed and Republicans handily won.

All content from Kiddle encyclopedia articles (including the article images and facts) can be freely used under Attribution-ShareAlike license, unless stated otherwise. Cite this article:
Teapot Dome Facts for Kids. Kiddle Encyclopedia.