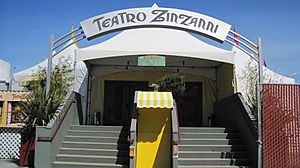 Teatro ZinZanni is a circus dinner theater that began in the neighborhood of Lower Queen Anne in Seattle, Washington. It has since expanded to a site on the waterfront at Pier 29 on The Embarcadero in San Francisco, California.

Teatro ZinZanni was created by Norman Langill, and was once described as "the Moulin Rouge meets Cirque du Soleil." The show is a blend of European cabaret, circus arts, fine dining, and vaudeville performed in a Belgian spiegeltent (mirror tent). Until mid-2011 the show was produced by the Seattle-based non-profit events company, One Reel. Teatro Zinzanni is now an independent company.

Teatro ZinZanni began in Seattle in October 1998 for an eight-week run and ended up playing to sold-out houses until it closed on December 31, 1999. Members of the original cast included tap dancer Wayne Doba, also known for being San Francisco Giants mascot the Crazy Crab, Kevin Kent, and Ann Wilson of the rock group Heart. It then moved its operation to San Francisco, opening there in March 2000. In 2002, it reopened a permanent operation in Seattle's Belltown district. The operation has since moved to Seattle's theatre district on Mercer Street across from Seattle Center. As of 2017, Teatro ZinZanni has moved To Redmond WA, in the Marymoor Park Area. This is said to be a temporary location through April 2018, at which time they will move to a permanent location. Teatro ZinZanni's San Francisco location closed its operation on December 31, 2011, due to the city's preparation for the America's Cup, but has plan to reopen at another location on the Embarcadero after fund-raising is complete.

Teatro ZinZanni also has a Chicago location in the downtown theatre district. It's a permanent location opened in 2019.

Teatro ZinZanni has produced two CDs: The Divas, with Baez, Montevecchi, Kellerman, Thelma Houston and others, and Omnium, a collaboration of TZ Maestro Norm Durkee with Martha Davis.

All content from Kiddle encyclopedia articles (including the article images and facts) can be freely used under Attribution-ShareAlike license, unless stated otherwise. Cite this article:
Teatro ZinZanni Facts for Kids. Kiddle Encyclopedia.