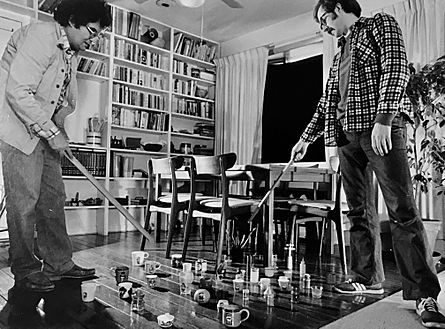 Teeny Little Super Guy was an animated short featured on PBS's Sesame Street. The shorts featured a small animated man, the Teeny Little Super Guy, who resides in a live-action, regular-sized kitchen. He is a small, bald man who wears a yellow hat, a yellow long-sleeved shirt, red pants and black shoes. He also lives attached to a clear plastic cup. Robert W. Morrow described the shorts as including "parables of childhood conflict and striving."

The production for Teeny Little Super Guy started in May 1982 with Paul Fierlinger, Larry Gold, Jim Thurman, Stuart Horn, Patrick McMahon, and Edith Zornow. In August 1982, the production for the shorts developed more seriously into filming the first two shorts. On November 19, 1982, the first short premiered on Sesame Street. Composer Larry Gold wrote the theme song, with lyrics by Stuart Horn. Actor and longtime Sesame Street writer Jim Thurman performed all character voices. The production started filming in Philadelphia, Pennsylvania at Paul Fierlinger's house in the Philadelphia suburbs. It ran on Sesame Street from 1982 until 2001.

Today, one of the Teeny Little Super Guy cups, along with a picture of Fierlinger rotating the cups, is actually inside the public display case at the Brooklyn Public Library along with the other Sesame Street contributors. The display also includes another picture of the character with a yellow balloon. The plaque at the Brooklyn Public Library mentions that "Teeny Little Super Guy," an instant hit two seasons later in 1982, was shot by stop-motion filmmaker Paul Fierlinger, using common household objects. Most of the animation was also done with Tom Sloan along with Ondre Ocenas and Helena Fierlinger. In Episode 4196 of Sesame Street, Luis was inspecting Leela's troubled washing machine. He managed to extract seven items, including the famous Teeny Little Super Guy.

The filming was done primarily in Paul's house and his studio next door. It was filmed using a 16mm Bolex with an electric motor drive giving a shutter speed of about 1/6 of a second. This allowed for higher f-stops and therefore having the 3D objects to be in better focus. Some of the scenes used early video assist to see how the scene looked on a TV monitor.

All content from Kiddle encyclopedia articles (including the article images and facts) can be freely used under Attribution-ShareAlike license, unless stated otherwise. Cite this article:
Teeny Little Super Guy Facts for Kids. Kiddle Encyclopedia.