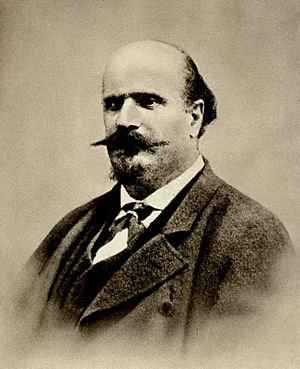 He was born in Ferrara. He received his education at the Imperial College in Vienna and at the University of Pavia. Throughout his life he actively participated in anti-Austrian resistance. At one point, he was incarcerated for his activities. He completed several literary works, including the novel Michelino, his style influenced by Alessandro Manzoni. He then found work as a librettist; his collaboration with the composer Giuseppe Verdi began in 1839 and lasted for a few years.

Solera then found work as the impresario for the Royal Theatre in Madrid. He died in Milan in 1878.

All content from Kiddle encyclopedia articles (including the article images and facts) can be freely used under Attribution-ShareAlike license, unless stated otherwise. Cite this article:
Temistocle Solera Facts for Kids. Kiddle Encyclopedia.